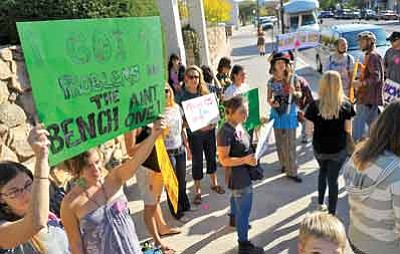 PRESCOTT - About 50 protesters at Prescott City Hall kept a contentious park bench in the forefront Tuesday, even though the Prescott City Council did not discuss the issue.

Carrying protest signs that included sentiments such as "Don't bench the bench," and "The bench is not a crime," the protesters gathered along Cortez Street in front of city hall prior to the start of this week's council workshop.

Artist Kristin Anthony, who created the Granite Creek Park bench over the summer as a part of her senior project for Prescott College, said the protest was a sign to the city that "there are people here who love the bench."

Although they were not on the council agenda for official discussion, about three dozen of the protesters filed into the council chambers, carrying their signs, and remained for a portion of the meeting.

"We want to raise awareness with the City Council," Anthony said.

Before the start of the meeting, Mayor Marlin Kuykendall said the matter would not be a matter of discussion this week. In order to get on a future agenda, Kuykendall said, "It'll take two members of the council, or the public can always ask for five minutes (during the 'call to the public' portion of a meeting)."

Meanwhile, the two sides plan to meet this morning to try to resolve the matter. Parks and Recreation Director Debbie Horton and Anthony both voiced some hope on Tuesday for a compromise that would settle the matter.

"If she comes in with plans, we'll review them," Horton said after Tuesday's council meeting. "It needs to be something we can maintain."

Horton and Joe Baynes, who has served as acting parks and recreation director while Horton helped with city management duties at city hall, both maintained that the current design of the bench is too intricate to be preserved into the future.

"This is beyond our ability to maintain," Horton said, adding that the design should be less complicated. "The plainer, the better," she said.

Baynes said the bench presents "functionality, safety and maintenance" concerns for him. "We just can't maintain 100, 200 messages," he said of the many pieces of the bench mosaics.

Baynes added, "the ball's been in (Anthony's) court for two weeks," while the city has waited for a revision proposal.

While Anthony said she has some revision ideas in mind, she said she was reluctant to agree to a plan that would involve the removal of the mosaics. "Those tiles are the heartbeat of the bench," she said.

At the same time, Anthony said, "having the bench torn down" would go against her original goal of bringing the community together through the bench.

To form the mosaics, Anthony said she asked members of the community to place tiles on the bench "that came from their heart. I never gave any more direction than that."

What resulted was a colorful circular bench, formed around a tree at Granite Creek Park, which depicts a number of designs and symbols, such as a police badge and a peace sign.

The controversy, which began after the late-September move by the city to shut down work on the bench, has generated support for the bench, as well as opposition.

Detractors say Anthony built something that does not closely resemble the plans she initially submitted to the city.

On Tuesday, Anthony said the drawing was never intended to be a final plan for the bench. She has maintained that city parks officials were aware of what she was doing throughout the bench construction and voiced no objections. "We were monitored every day," she said.

Horton said the parks and recreation department did not get the project to the proper authorities. "Where we dropped the ball was we didn't give this project the proper level, the type of oversight that it deserved," she said.

Baynes added that the department has made some changes aimed at preventing such an oversight from happening in the future.

Among the protesters on Tuesday was local mural artist R. Wall, who suggested that the bench controversy could trigger the development of a city policy on public art.

"I always thought it was a little strange that there wasn't more of a process in place," said Wall, who was involved the 2010 controversy over a mural at the Miller Valley Elementary School.

After the meeting, Kuykendall said that such a policy is a possibility, but he said it likely would not happen in the near future.

"Sure, it could happen, but I don't see it happening right away," Kuykendall said. "We have so many other things on our plate. Putting our (budget) house in order is number-one."