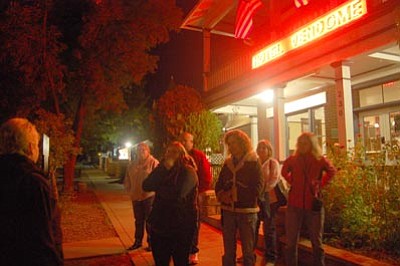 PRESCOTT - Steeped in territorial history, it's no wonder that Prescott is home to a shocking number of ghost stories.

If you don't believe it, just take a ghost tour with Darlene Wilson of "A Haunting Experience" or Madeline Groves of "Haunted Prescott." Both started offering Prescott ghost tours within the past year or so.

"This town is so full of history," Wilson told her tour participants last Sunday. "It's an amazing place."

The concentration of historic buildings in downtown Prescott makes the walking tours enjoyable strolls. Each lasts a bit longer than two hours.

Many of the tour guides' stories center on the saloons and brothels that once littered Whiskey Row and other downtown structures. Others involve alleged underground tunnels or hangings that took place on the courthouse plaza. They even have their own stories of paranormal experiences.

The tours and their guides are different enough for people to enjoy doing both.

Wilson employs the "Ghost Radar" app during her tours. It's supposed to help detect ghosts' location and sounds. Periodically, red dots show up on her iPhone and voices make short statements.

You don't have to believe in ghosts to enjoy the tours, but don't take the tour guides' "historical" accounts too seriously.

While most of the tours roam the downtown streets and alleys, sometimes the guides take participants indoors, including the Vendome Hotel and Jersey Lilly Saloon hallway.

"It was cool to go up in buildings I've never been in before," said Sara Steiner of Prescott, who joined Groves' tour Thursday.

The relatively full moon and smoke from a prescribed burn south of town added to the haunting feeling this week.

"You've got to believe in something, whether it's real or not," she said. "Anything's possible."

Her friend Merilyn Sanchez of Phoenix said she saw the ghost of her grandmother shortly before receiving a call about her death.

Fifteen-year-old Kaylee Butler of Gilbert was asked if she would be afraid to sleep in the Vendome Hotel after hearing ghost stories about it.

"No, but she's sleeping with me," Kaylee said, pointing to her mother.

Kaylee, born just a few days before Halloween, clearly had an itch to see a ghost, since she was heading to Prescott's Hassayampa Inn the following night and then up to the Grand Hotel in Jerome.

While attendees didn't get any clear evidence of ghosts on the tours, they did see a tassel at the end of a window blind moving (could it have been the air flow?), and a flickering streetlight.

Groves said the flickering happens every time she stops near Annie's Attic with a tour and talks about the ghost of a little girl named Annie. The group stopped by the streetlight after the tour and it was still flickering. Perhaps it was entertaining the inebriated guys nearby.

Ghosts' characters are the same in death as in life, Wilson told her tour participants.

To avoid trouble with apparitions, Wilson advised the group to say out loud, "If you're here in the name of God, enter. If not, leave."

The hours between 11 p.m. to 4 a.m. are best time to spot ghosts, Wilson said, because it takes less energy for them to manifest.

"Some people attract ghosts; some don't," she added.

Both Wilson and Groves say they have a long history with the paranormal.

Groves said she's been fascinated by ghost stories ever since she was a child. She thought of doing Prescott ghosts tours when she saw a sign about local historic tours.

"I started going up and down Whiskey Row door to door, asking for stories," Groves related. She found plenty.

During her tours, she asks participants about their own ghostly experiences.

"I keep gathering more and more stories," she said.

Wilson said her first personal ghost experience occurred at the legendary Stanley Hotel in Estes Park, Colo., when a little boy's ghost entered her body and she couldn't move. Then she started having dreams about helping ghosts.

Wilson said she used her psychic abilities to help police until it became too upsetting and caused migraines.

She got the idea to lead ghost tours after some friends asked her to take them on a tour of Jerome's cemetery, she said.

"The more I got into it, way more stories started coming out," Wilson said.