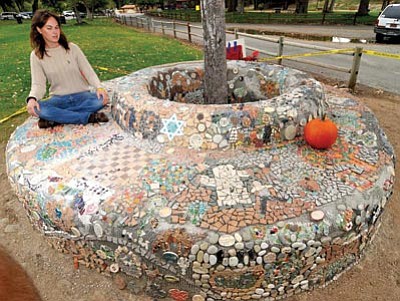 PRESCOTT - A new community-built park bench that circles a tree at Granite Creek Park has become a source of controversy that at least one activist is comparing to the Miller Valley Elementary School mural brouhaha.

About 30 people gathered at the bench, a donut-shaped concrete construction covered with mosaic tiles placed by volunteers, on Sunday to protest the possibility that the bench could be torn down.

The project is the vision of artist Kristin Anthony, a college student who said she came up with the idea while in Nepal. The tiles covering the concrete depict images from a police badge to various religious symbols to memorials for people who have passed away.

Acting Prescott Parks and Recreation Director Joe Baynes said that he had been out to see the bench after he received some citizen complaints. Baynes said his problems with the project were the nature of the tiles, some of which are sharp and represent a safety hazard - and that the bench itself is not what Anthony proposed and the Parks and Recreation Department approved.

Baynes said he believed the bench could be repaired to meet requirements.

Councilman Steve Blair expressed his opposition on his KYCA radio show this past Friday morning. "(Parks and Recreation) approved the bench as per plan, or per sketch," Blair said. "The sketch and plan he approved looked absolutely zero like the finished product. Therefore, she (Anthony) did not do what she was supposed to do."

Anthony said she supplied a sketch, but was never asked for a plan of any kind.

"What they're asking us to do is to remove all these existing tiles and replace them with bigger and neutral tiles," Anthony said. "That raises a lot of questions in my mind, of why they said "neutral,' if we're talking about safety and functionality and maintenance." She suggested that the images are the real issue, but that if allowed to complete the project, she would grout around them to smooth the edges.

R.E. Wall, leader of Prescott's Downtown Mural Projects, said he believes Blair is behind the opposition to the bench. "There was just vague "go for it,' and up until the other day it was perfectly fine with them," Wall said.

"This is the kind of tactic used in the past. The City of Prescott does not have a policy for public art and they seem to be shooting from the hip and making it up as they go along."

Blair, who was behind the campaign to "lighten" the skin of minority children painted on the Miller Valley Elementary School mural, said on the radio that he intends to fix the problem of inconsistency, and will propose specific rules for public art.

A second protest rally is planned for Sunday from 1 to 4 p.m. at Granite Creek Park.