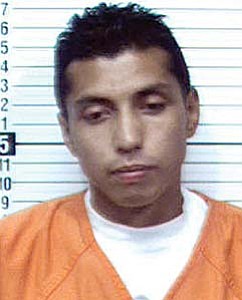 PRESCOTT - A man who police said pointed a gun at another man outside a tattoo parlor has been arrested and charged with aggravated assault.

Prescott Police said Michael Ortez, 26, of Prescott threatened an employee at Phoenix Rising Tattoo in the 400 block of North Arizona Street on Oct. 1.

The employee told police that he went outside the shop because there was loud music coming from a white SUV. Once he was outside, the employee claimed, Ortez, who had been driving, got out, took something from the vehicle and started walking toward the business.

Ortez pointed a gun at him, said the employee, who put his hands up then ran inside.

According to police, both men used to date the same woman and both were possible fathers to a new baby.

A second witness said that Ortez chambered a round and asked where the first man had gone. Told that no one knew, Ortez got back into the SUV and left.

Police officers called Ortez on the phone, who agreed to meet them.

He was arrested and booked into the Camp Verde Jail on charges of aggravated assault and disorderly conduct with weapons.