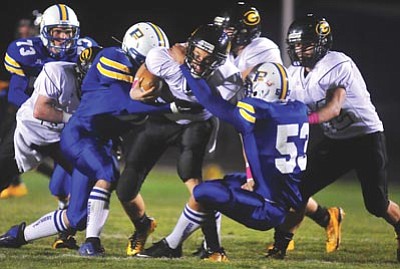 The Badgers snapped a two-game losing streak with a 20-7 victory over Phoenix Goldwater in a Division II, Section III showdown at Bill Shepard Field.

PHS limited the Bulldogs to 206 yards of total offense and did not surrender a touchdown to the club until deep in the fourth quarter.

"Defense was the heart and soul for us tonight," said Prescott tailback Brady Mengarelli, who ran for a team-high eight carries for 59 yards and a touchdown. "They kept us in this game."

With the win, D-II No. 34-ranked Prescott improved to 3-4 overall and 2-1 in its section. Meanwhile, Goldwater dropped to 1-6 overall and 1-5 in the section.

Prescott benefited from good field position for most of the evening, something that the Badgers have struggled with for much of the season.

"Our special teams really stepped up for the first time this year," PHS coach Steve Moran said. "That helped a whole lot. It changed the perspective of things that we needed to call offensively."

The Badgers carried only a 7-0 lead into halftime, and they did it in the most unorthodox manner. They claimed a quick 3-0 edge on a 35-yard field goal from kicker Dane Campbell with 7:39 to go in the first quarter. Prescott followed that up with a pair of safeties thanks to two snaps deep in the Bulldogs' own end that sailed over Goldwater punter Tanner Horton's head and into the end zone.

PHS's offense didn't pick up much steam until the third quarter after Badgers linebacker Kalen Bierhaus recovered a fumble on a long Goldwater drive to open the third period.

"Consistency has really been a big thing for us," Bierhaus said of Prescott's stingy defense. "When we need to step up, we step up. When the coach asks us to do something, we usually get it done."

Badgers quarterback Brad Hall, who completed 15-of-25 passes for 95 yards, was fairly effective in the shotgun short-passing spread attack. But it was tailback Brady Mengarelli, whose 21-yard TD scamper with 3:22 left in the third, who propelled Prescott to the victory.

On its next possession, PHS pieced together a lengthy drive that resulted in a 1-yard TD run from tailback Dakoda Peterson for a 20-0 Badgers edge after a failed extra point.

"Goldwater was giving us so much pressure up the middle that we decided we had to go to the outside with our sweeps," Moran said. "This is probably the best night we've had throwing the football the whole year."

Next Friday, the Badgers travel to Cottonwood to face D-IV Mingus.