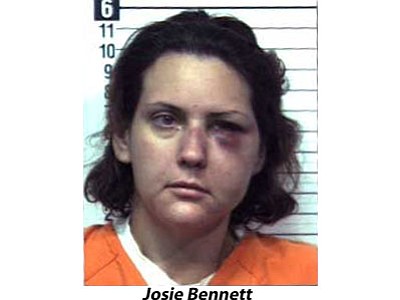 PRESCOTT - A woman charged with attempted first-degree murder after she tried to stab a person and then went on a drunken rampage in her car appeared in court Monday to accept a plea bargain and could end up in prison for 12 years if sentenced to the maximum.

In October 2010, Josie Bennett, 30, of Prescott Valley made threats to her ex-boyfriend's new girlfriend, saying she would cut her with a knife and kill her, said Sgt. Brandon Bonney, spokesman for the Prescott Police Department. Bennett got drunk, drove to the girlfriend's home in the 3300 block of Tower, tried to stab her, missed and caused a superficial injury, said Bonney.

Bystanders took the knife away from Bennett, who then got into her vehicle, tried to run down several people, hit three parked cars, a home, and a fence, and finally stopped when she hit a brick wall and the vehicle was disabled.

The criminal damage will likely result in her making restitution to the victims, and that adds up to more than $7,700.

Yavapai County Superior Court Judge Celé Hancock did not set a sentencing date. "Miss Bennett has a serious medical condition that needs to be taken care of," said Hancock. "I am going to defer acceptance of this plea agreement" until a later date to give Bennett the time she needs.

Hancock did not say from what medical condition Bennett is suffering.