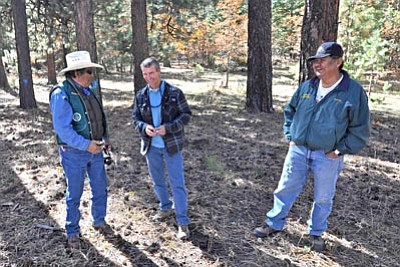 The late October meeting was something out of the ordinary for both agencies, but the enthusiasm to build a partnership was mutual.

"In all my time here, we've never had a visit from a national forest," Navajo Forest Manager Alex Becenti said. "So I am encouraged to hear this talk of building relationships."

The group spent the first day of the trip exchanging information about their respective forests and forestry programs. The second day the group visited the site of a 2,200-acre forest restoration project atop Defiance Plateau and the site of a proposed timber sale in the Chuska Mountains.

The Navajo Nation Forestry Department manages about 600,000 acres of ponderosa pine and mixed conifer forest and about 4.8 million acres of piñon-juniper woodlands with only 32 employees, Becenti explained. One of the department's recent successes involved supplying firewood to hundreds of local residents during a severe winter storm power failure last year.

The Kaibab National Forest also is a source of firewood for many Navajo residents living on the western side of the reservation. Kaibab employees discussed ways of improving firewood and ceremonial forest product offerings to Navajo residents, as well as an upcoming hand-thinning project along the Navajo border with the Tusayan Ranger District that received a grant from the Coconino Resource Advisory Committee.

The Navajo foresters also indicated a need for a certified silviculturist (tree specialist) to review the silviculture prescriptions within the nation's National Environmental Policy Act project documents. North Kaibab Silviculturist Garry Domis agreed to help the department in any way he could.

The Kaibab employees invited the Navajo foresters to visit the Kaibab Forest in the near future, and both groups expressed an interest in continuing to build a relationship between the national and tribal forests.

"In the end, the Navajo people will benefit as well as the Navajo Forest," Kaibab Navajo liaison Mae Franklin said.