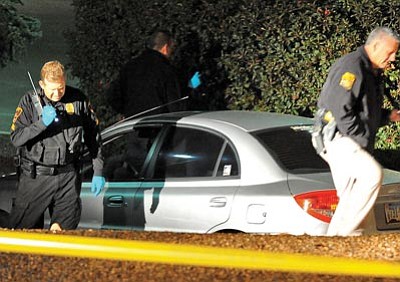 The suspect involved in an alleged carjacking that began in downtown Prescott and ended with a single-vehicle wreck in Prescott Valley early Friday night remains in a Phoenix hospital awaiting his arrest, a Prescott police spokesman said Saturday.

Other than the suspect, no one suffered injuries related to the car accident. No one was hurt during the carjacking, either.

Lt. Andy Reinhardt with the Prescott Police Department said the suspect, 24-year-old Samuel Emmitt Crook of Cornville in the Verde Valley, suffered a broken leg and ankle shortly after he lost control of a stolen silver Kia Rio that eventually landed in a drainage culvert on the McDonald's property at the corner of Lake Valley Road and Highway 69.

Charges have not yet been filed against Crook for stealing a man's car in downtown Prescott because Crook is still recovering at John C. Lincoln North Mountain Hospital in north Phoenix, where he was flown after the accident. Reinhardt did not say when an arrest would be made and he did not know whether Crook had a past criminal record.

Reinhardt said the carjacking incident started Friday evening, shortly after a man who works in downtown Prescott walked out to his 2003 silver Kia Rio in the 100 block of North Montezuma Street to retrieve a cellphone he left inside the vehicle.

Prescott police say Crook approached the car's owner after he got his cellphone. Crook then reportedly asked the vehicle's owner if he could drive him to Prescott Valley.

At that point, Reinhardt said Crook allegedly lifted up his shirt and displayed a handgun in his waistband. The suspect apparently said, "Give me your keys."

The victim gave Crook his keys without incident and the suspect took off in the car.

After Crook had driven northbound on Montezuma, witnesses told police that they last saw the Kia traveling eastbound on Sheldon Street en route to Highway 69 toward PV.

Prescott police alerted other law enforcement agencies in the area about the carjacking and PV police later took over attempts to apprehend the suspect. At one point, PV police said they observed the vehicle at Valley View Road and estimated its speed in excess of 100 mph.

Later, as Crook attempted to turn north on Lake Valley Road from Highway 69, he lost control of the car, which wound up in the drainage culvert near McDonald's.

A PV police officer in a patrol truck subsequently apprehended Crook on Lake Valley Road after he found him on the ground with his leg partially under the tire of his truck, PVPD reported.

Reinhardt added that a carjacking is a rare occurrence in Prescott.

"I actually can't recall a carjacking that we've had in at least the last five years," he said. "We get vehicles stolen, but not (directly) from the victims themselves."