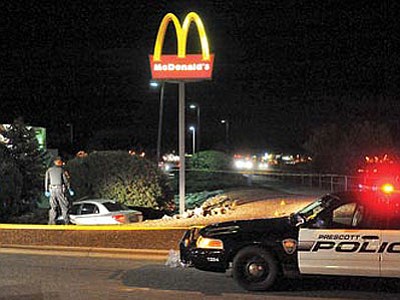 Prescott Valley police officers and detectives survey the scene in front of McDonald’s after an alleged carjacking that started on Gurley Street in Prescott.<br> Photo courtesy Matt Hinshaw

An alleged carjacking at gunpoint in Prescott Friday evening ended in Prescott Valley when the suspect lost control of the car and landed in a drainage culvert on the McDonald's property at the corner of Lake Valley Road and Highway 69.

The name of the suspect, who was taken into custody after the incident, was not available by press time Friday.

Earlier in the evening, Prescott police alerted other law enforcement agencies in the area that a carjacking at gunpoint had occurred on Gurley Street and that a small silver car had been taken, Prescott Valley police spokesman Cmdr. Art Askew said.

Prescott Valley police positioned officers at Victorian Estates and Sam's Club, and a third officer waited on the south side of Lake Valley and Highway 69. Another call came into Prescott Valley police that a reckless car was heading toward Prescott Valley, and it matched the description of the stolen car, Askew said. The officer at Victorian Estates estimated the car was traveling 70 mph. The car then ran a red light at Sundog Ranch Road on Highway 69 and passed the officer at Sam's Club at increasing speed. Both officers pulled onto the highway, Askew said, and they observed the vehicle at Valley View Road and estimated its speed in excess of 100 mph.

For the safety of other motorists, there was no pursuit of the car, Askew said. The officers radioed ahead, and PV Police Officer Paul Hines saw the car coming toward him. As the vehicle tried to turn north on Lake Valley, the suspect lost control and ended up in the drainage culvert.

Hines turned on his emergency lights, crossed the highway and pulled up on Lake Valley Road. When he got out of his police truck, he heard the suspect yelling, went to the passenger side of his truck and found the suspect on the ground with his leg partially under the tire of the patrol truck, Askew said.

Askew said the Department of Public Safety will investigate the accident and that Prescott police are handling the arrest for the carjacking.

Lake Valley Road was roped off from Highway 69 to Pav Way while officers investigated the incident, Askew said.

No further information was available at press time.