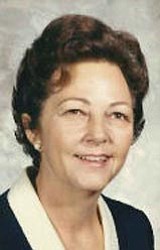 Gloria was married to the late Bruce O. "Jack" Walthall from 1946 to 1970, then remarried Donald Pickering, with their union lasting for 32 years. Don was the love of her life, she had always said. They had a wonderful life together and shared great adventures with many wonderful friends they had made throughout their lives.

Gloria graduated from Arizona State University with a bachelor's degree in education. She began her teaching career in 1954 in Mesa, Ariz., for one year before joining the Creighton School District in 1955, and continued teaching there until retiring and relocating to Prescott, Ariz. She always taught proper grammar to her grandchildren and insisted on its usage to her many friends, young and old. Her former students would often stop her while out shopping to talk with her and introduce their own children to her.

Being the social butterfly that she was, Gloria loved to go to Bucky's and take trips to Laughlin, Nev. She very much enjoyed sitting on the porch watching the birds, identifying them along with all the other animals.

She was a wonderful wife, mother, grandmother, great-grandmother and friend.

Visitation will be noon Saturday, Nov. 12, 2011, at Heritage Memory Mortuary with memorial service to follow at 1 p.m.