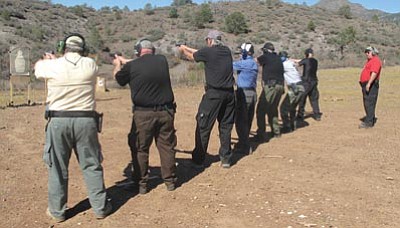 Courtesy photo<br> The Prescott Valley Detachment of the Verde Valley Company of the Arizona Rangers displays marksmanship skills during a training and qualification shoot Oct. 16 at Mingus Meadows. The detachment is recruiting members.

However, members of the Prescott Valley Detachment of the Verde Valley Company of the Rangers are not doing it for show or glory.

They conduct traffic controls and security at events, volunteering at the request of and under the direction of law enforcement officials. They accept donations that they in turn use to support youth organizations.

The detachment has taken part in 29 events since February, said its lieutenant, David Kyburz.

The Rangers provided overall security and traffic control for three weekends during the pumpkin festival that concluded Oct. 30 at Mortimer Family Farms in Dewey-Humboldt. The event drew 16,000 people, according to Sharla Mortimer, who owns the farm with husband Gary.

"We had spoken to (the Rangers) about volunteering," she said. "I decided they would be a good asset."

Although the Rangers are armed when they are on duty, they have never had to use their weapons, Kyburz said, adding that prospective members undergo extensive background checks and obtain carrying concealed weapons permits. Any felonies on their records would disqualify prospective members.

"The thing about the CCW (permit) is it does have another background check," Holt said. "They check you for any kind of (criminal) contact with the law, domestic violence."

To obtain a permit, the prospective Ranger must take an eight-hour class, Kyburz said.

After the Ranger applicants pass the background checks, the members decide whether the prospects will undergo a three-month probationary period, Holt said.

The probationers also must score at least 210 out of a possible 250 points on the 50-round qualification shoot of the Arizona Peace Officers Standards and Training, Holt said.

They shoot at a silhouette target at distances from three to 25 yards, detachment member Ray Fauth said.

The final step to becoming a "full" Ranger is a vote of the members, Holt said. He added he knows of only one prospect who did not survive the probationary period.

The Rangers stressed that they undergo continuous training in areas such as report writing, situational awareness, crowd control, defense tactics and firearms safety.

Rangers spend anywhere from seven to 150 hours a month in their duties, Holt said.

At least half of the detachment members are ex-military or retired from law enforcement, Kyburz said.

Kyburz, 67, said he worked in the security field for about 12 years, including a stint as director of security at the John Hancock building in Chicago.

Kyburz said the detachment is trying to increase its membership to 26 because the Arizona Rangers formed in 1901 with 26 members. The Rangers organized to protect the Arizona Territory from outlaws and cattle rustlers so that the territory could seek statehood.

The territorial governor disbanded the Rangers in 1909, but they became re-established in 1957.

Members must be American citizens, at least 21, and residents of Arizona for six months or longer. The detachment is open to women.