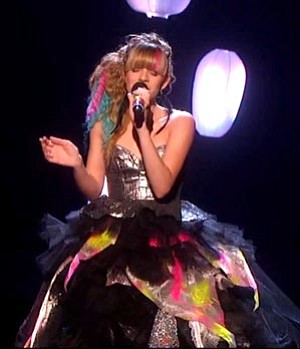 Drew's dress inspired Simon Cowell to remark, "You take risks. You have got the guts to design something yourself, which shows individuality (like) Lady Gaga."

By MATT SANTOS
Originally Published: November 9, 2011 10:29 p.m.
Tweet
Wednesday night's show proved to be the biggest challenge yet for 14-year-old Chino Valley resident Drew Ryniewicz, as she and her fellow contestants performed songs from movie soundtracks, battling it out for a $5 million grand prize on Fox's "X Factor."While the judges have previously praised Drew as the one to beat, last night she was greeted with her first real criticism as the competition comes down to the wire."That was really good. You were really good last week and the week before. But I don't know the difference between the three performances," said judge L.A. Reid. "I need some diversity from you. I need to see you do something different." He then went on to critique Simon Cowell's song choice for his protégée - Coldplay's "Fix You" from the "You, Me, and Dupree" soundtrack. "Whose home theater was that movie released in? I've never heard of it. Some of my home movies have a soundtrack; you might as well have sang one of those."Paula Abdul, known for her warm and fuzzy comments, found fault in Drew's choice of wardrobe. "I gotta be honest with you, you're a beautiful girl. But that outfit took the seriousness away. Don't take fashion advice from Simon anymore."Abdul's words cut deeper when Cowell pointed out that the choice and design of the outfit was all Drew."Oh my gosh. Now I feel really bad. But I'm being honest," responded Abdul.Cowell stuck up for his pupil: "This is why I love working with you, Drew - you take risks. You have got the guts to design something yourself, which shows individuality (like) Lady Gaga. Also, this is why, thank God, I am her mentor. My job is to take this girl, at 14, and try to develop her, with her help, into a recording artist and change her life."The competition continues 7 p.m. Thursday on Fox, when the public vote will be announced and viewers will find out which of the remaining performers will be brought back next week.
Report a Typo Contact
Sign up for Courier e-News Alerts
Most Read
7 days
30 days