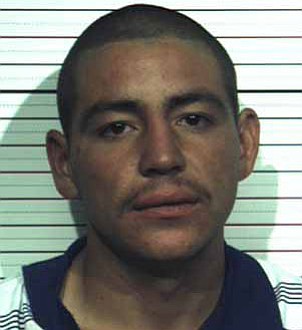 CORDES LAKES - The Yavapai County Sheriff's SWAT team arrested a man Sunday afternoon after he allegedly fired shots at deputies before running to a nearby shed and refusing to come out.

Just before 10 a.m., Martin Rodriguez-Barrera, 19, was pacing in the backyard of a home in the 16000 block of South Apache Drive and demanding water, said YCSO spokesman Dwight D'Evelyn. The homeowner called 911 and reported a trespasser.

When deputies arrived, Rodriguez-Barrera ignored their commands, threw an object on the ground and ran away, D'Evelyn said. The man allegedly fired a shot at deputies who gave chase, he added.

The object Rodriguez-Barrera had been holding was a plastic container with two grams of meth inside along with $1,600, D'Evelyn said.

About 1:45 p.m., deputies saw the suspect going into a shed of a home in the 16000 block of Yavapai Road. They evacuated the homeowner and a negotiator tried to contact Rodriguez-Barrera, but he didn't respond.

SWAT fired tear gas into the shed, but it did not force him out. SWAT entered the shed and found the suspect hiding near the roof, D'Evelyn said, and when they took him into custody, deputies found a handgun on him.

They also located a second handgun in a yard on Black Rock Trail, as well as a usable amount of cocaine along the path Rodriguez-Barrera had taken, D'Evelyn said.

One of the shots he allegedly fired struck a home occupied by a family of four, D'Evelyn added.

D'Evelyn said the suspect admitted possession of both weapons and that he is in the country illegally.

"The suspect has been deported on four prior occasions since 2009," D'Evelyn said. "We have linked him to a car previously reported stolen out of Phoenix the night before the incident. The car was recovered in the Cordes Lakes area," he said.