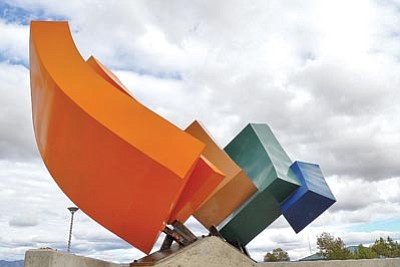 Matt Hinshaw/The Daily Courier<br> “Limitless,” above, by artist Michael J. Tierney was Prescott Valley’s first piece of public art. It was originally located on Highway 69 in 1989, but was moved to the Prescott Valley Civic Center grounds, joining other pieces of public art like “A Boy and His Dog.”

PRESCOTT VALLEY - Artist Rebecca Brooks gathered at her parents' stained-glass shop Wednesday afternoon with four others to discuss completion of a tile mosaic project on a multiuse path along Highway 69.

The tiles are part of the "Pieces of Our Lives" project that Brooks started in 2005 along the path from Navajo Drive west to Glassford Hill Road. Twelve squares of tiles are embedded in a small, curved concrete wall just west of Navajo Drive.

The tiles took the name because they contain pieces of broken dishes that go back as far as four generations among Prescott Valley residents who contributed to the public art project. Brooks said she suggested dishes because they represent the community.

Brooks said she met over consecutive weekends with representatives from the commission, Bradshaw Mountain High School and the Girl Scouts to go over the first phase of the project.

The second phase, which ends at Stoneridge Drive, will begin this month, Witty said, adding that he will hire a contractor to install the tiles.

The tiles and other public art projects have not sparked controversy in Prescott Valley, unlike the clashes in Prescott over a mural at Miller Valley Elementary School, a withdrawn park bench project at Granite Creek Park, and a nixed proposal for an illustrated timeline around City Hall.

In fact, public art has not encountered opposition in Prescott Valley since the abstract sculpture "Limitless" went on display on Highway 69 in 1989. The sculpture, now located on the Civic Center grounds, marked Prescott Valley's debut into public art.

Public art in Prescott Valley also consists of sculptures of three Indian warriors, a boy and his dog, a police officer protecting a boy, and other figures on the Civic Center grounds. Public art also can be found inside the Public Library and George Andersen Park.

"I think the value of public art from an aesthetic standpoint is it enhances the environment and it allows a town or an entity to personalize public space as opposed to being generic," said Christine Scott, a former Arts and Culture commissioner. "Over time, historically, public art has been a great way for the public to have respectful dialogue about the role of art in everyday life."

Scott, a former art teacher at Bradshaw Mountain High School, said she does not think public art has been controversial in Prescott Valley because it is "not entrenched in as much history and tradition" as neighboring Prescott.

"As a new community, we have an opportunity to try out new ideas," she said. "The public art in Prescott Valley has oversight from the arts commission, and there is a committee making those choices every year."

In response to the thematic- and safety-related hoopla over the now-disassembled park bench at Granite Creek Park, the Prescott Area Arts and Humanities Council is helping city officials to formulate a public art policy, said Cindy Gresser, the council's president.

"I simply think that the conflict that has occurred could have been avoided if polices had been in place," said Gresser, executive director of the Smoki Museum.