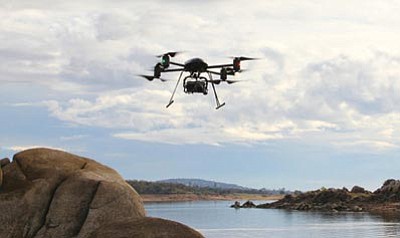 Courtesy photo<br> The Draganflyer X8 is a tiny unmanned helicopter weighing under four pounds. If the county partners with Embry-Riddle, it could be flying over Yavapai County.

Originally Published: November 4, 2011 9:55 p.m.
Tweet
PRESCOTT - There will be a new eye in the skies over Yavapai County if the Board of Supervisors on Monday approves a proposal to team up with Embry-Riddle Aeronautical University on an Unmanned Aerial Vehicle (UAV) program. The school has the opportunity to get ahold of one of these high-tech flying machines if it partners with the county, which would supply real-world missions for the UAV, said Nick Angiolillo, head of county Emergency Management.When most people think of a UAV, they may picture the large, heavily-armed Predator drone used in fighting in Iraq and Afghanistan, but this UAV is different, Angiolillo said.Called the Draganflyer X-8, it is a tiny craft, weighing just 60 ounces, and it folds up for transport. It's technically a helicopter, so it does not need a runway to take off or land. The 15-inch-long X-8 can carry just a 2.2-pound payload, meaning a specially-designed still camera, video camera for live transmission, or infrared sensing gear, and no more.Angiolillo said the X-8 can transmit data back only by line-of-sight and has a very limited time aloft; the company's specifications list 20 minutes of flight time per battery charge without a payload (camera or other sensors)."This (agreement) is really to help Embry-Riddle more than anything else, because if they can partner with an agency, they can get a free unit," said Angiolillo.In its proposal, ERAU offers several possible missions for the X-8, including support of search-and-rescue operations, surveillance of suspected criminal activity, area survey during high-level public events (such as visits by government officials), and various types of surveillance during natural disasters.That's what got Angiolillo's attention."Primarily, we see it being used as a low-cost, quick-assessment tool for flooding" and other natural disasters, he said. In return for the county's cooperation, ERAU would fly the craft at no charge when the county needs it.While this would seem to negate the need for the YCSO to have access to the helicopter being provided by Guidance later this month, Angiolillo said it isn't the same kind of tool."Line-of-sight is as far as it can go," he said, although it has an advantage over helicopters, which are more expensive to operate and take time to get into the air.Dwight D'Evelyn, spokesman for the Sheriff's Office, said, "We have not seen any proposal or held any formal meetings on (the project)."Carol Springer, chairman of the Yavapai County Board of Supervisors, called it a win-win for taxpayers because it would cost them nothing and provide a helpful service."This sounds like a wonderful opportunity," she said. "With what we are seeing with the success of drones in the Middle East and their capability... it seems like it would be very useful" in the civilian sector.Springer said she sees the X-8 working in tandem with a helicopter, not replacing it, on a major search effort.It could be some time before the X-8 is in the air over Yavapai County. FAA safety regulations are fairly murky; the agency's basic permitting process, called a Certificate of Approval, can take a day to allow a single UAV flight in the United States' National Airspace System. Even a so-called Emergency Certificate of Approval takes time.However, Draganfly cites an agency in Colorado, the Mesa County Sheriff's Office, that in February received the first blanket Certificate of Approval issued by the FAA, allowing them to operate a Draganfly UAV at will anyplace in their county.It is unclear whether ERAU would be eligible for a similar approval.
Contact
Sign up for Courier e-News Alerts
Most Read
7 days
30 days