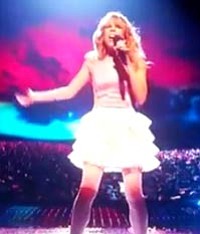 With her performance Wednesday night of Nelly's "Just a Dream," Chino Valley's own Drew Ryniewicz sealed her spot in the final 10 of Fox's "X Factor."

Wednesday's show was the first time the American public took part in the process, voting via toll-free numbers. The public spoke and Drew joined nine other contestants to advance to the final weeks before finding out who will win the $5 million grand prize.

After her performance Wednesday, judge Simon Cowell said of Drew, "I'm seeing a star emerge before my eyes."

Drew commented after her performance on Wednesday, "This is the most nervous I've ever felt because it's not up to just one person. It's up to millions, and it's really intense."

Also advancing by winning a lowest-vote showdown was the group The Stereo Hogzz.