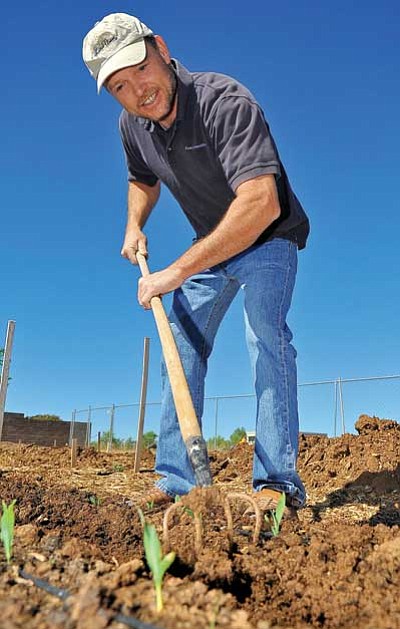 PRESCOTT VALLEY - Mark and Chantille Coné tried growing tomatoes and peppers in their backyard about six years ago but did not succeed.

Mark said grasshoppers or cicadas ate the four tomato and pepper plants to the stems. Chantille recalls other challenges being the quality of the soil and irrigating their hilly property.

The Conés hope to have better luck with the plot that they rented in the Prescott Valley Community Garden, located just north of the Albertsons store here.

The couple might see the fruits of their labors within a week. Mark, who works in construction, said on Saturday that he planted radishes on their 11-by-15-foot plot three weeks earlier, adding they should be ready for harvesting by this coming Saturday.

Chantille, a dental assistant, said she eagerly awaits the harvest of radishes and other crops she and Mark have planted.

"Absolutely," she said. "We are looking forward to a better quality of vegetables."

Optimistic, he said he thinks the plants will recover.

Meanwhile, Mark used a pitchfork to aerate the soil on his plot where he planted corn.

The community garden is located on 10 acres the Fain Signature Group donated this past May with the goal of helping to feed hungry families and seniors during the continuing economic slump. The garden gained the blessing from the Town Council, which approved a final development plan in October.

Since then, organizers and volunteers installed an irrigation system, carved the property into the community garden portion on the south and individual plots on the north side and applied woodchips to serve as mulch. A fence encloses the garden.

"It takes a long time to prep it with the manure and the drip line," said Judy Russell, who serves on the garden board and is splitting a plot with her friend, Mona Chase.

Russell said she and Chase, both residents of Prescott, planted cucumbers, cantaloupes, beans and radishes Thursday.

Chase said she participated in a community garden in 1997 while living in Albany, N.Y.

"It's just being outdoors," she said.

Chase and Russell waited on a bench for others to arrive to work on the community garden.

While they waited, Sandy Lundgren of Prescott Valley planted tomatoes on a test plot that master gardeners rented. She said the master gardeners sought to find out what grew well, and tested soil amendments, which add organic matter to the soil.

"We are going to be planting from now for the next couple of weeks," she said. So far, she also has planted scallop, spaghetti and zucchini squash, and bush beans.

She spread kale seed on the plot Saturday morning. She used alpaca manure as fertilizer on the plot and where she planted raspberries next to the brick wall in the community garden portion.

Lundgren said the master gardeners will plant lettuce and other fall crops once the monsoon season arrives.

For information about the garden, call Bonnie Flores at 772-3308.