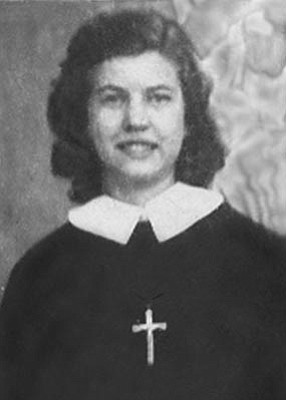 Cecelia Oween (Stone) Hellman left this lifetime and moved onto the next on May 22, 2011. She was preceded in death by her husband of 64 years, Henry G. Hellman and now joins him in heaven. She was born May 3, 1924 in East St. Louis, Ill. and lived to be 87 years old.

She moved to Phoenix in March of 1938 with her parents and four siblings as her father had been diagnosed with tuberculosis and was advised to move for his health. She graduated from St. Mary's High School in Phoenix in June of 1940 and entered the Precious Blood Order of Catholic nuns in Dayton, Ohio. In 1941, she was also diagnosed with tuberculosis and had to leave the convent and return to Phoenix.

Cecelia married Henry Hellman of Phoenix on April 27, 1946, and they resided in the Phoenix area, engaged in the dairy farming business. In 1963, they moved with their eight children to Humboldt. Cecelia was proud to be a homemaker and was also very active in the community. She assisted the Mayer Elders Organization for many years and was also elected to the Humboldt School Board for a number of terms. She wrote for the Prescott Courier in the late 60s and early 70s. The column dealt with local happenings in the Dewey, Humboldt and Mayer area and was quite well received by the community. Cecelia will be sorely missed by friends and family alike. Her grandchildren will remember the Christmas parties at Grandma's and the unusual gifts that they received. She was also famous for her "grab-bags" that she handed out to any and all children that happened by.

Cecelia's passing will be remembered and her life honored by a visitation from 5 to 8 p.m., Rosary at 7 p.m. Thursday, May 26, 2011. Mass will be 10 a.m. Friday, May 27, 2011 at St. Germaine Catholic Church. Interment to follow at Heritage Memorial Park in Dewey, Ariz. The family requests that in lieu of flowers, a generous donation be made in Cecelia's name to Sr. Mary Faye Hellman's school for Mayan Girls in Guatemala. Donations may be made in care of Hank Hellman or Sr. Mary Faye Hellman.

"There are some things that can't be controlled, like the wind in spring or when a friend grows old."