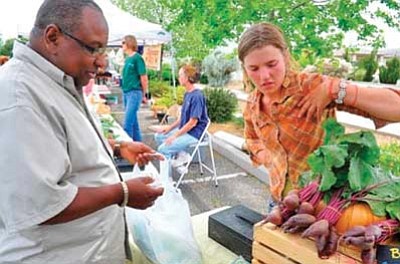 Paulden resident Shanti Rade of Whipstone Farm has been with the farmers market from the start, managed it for three years and served on its board for six years.

"We are having a really good spring," she said. "We anticipate a bountiful harvest."

"We are going to have dried chilis and dried pinto beans to cook up a pot of beans," she said. "We have a lot bigger variety of flowers for weddings."

She said Whipstone takes its goods to the farmers markets in Prescott, Chino Valley and Flagstaff.

The farmers market also features vendors who sell baked goods, pita chips, tamales and other edible items - even dog treats. Visitors also can get a massage or adopt dogs from United Animal Friends.

Plans are in the works for a farm day Aug. 6 featuring farm animals and a "veggie-car" vehicle, Market Manager Erin Lingo said.

She said people should visit the Prescott Farmers Market because "local produce is the freshest, highest-quality produce you can find." She added most of the growers use organic pest and weed control but are not certified organic.

Lingo said she is excited about plans for a farmers market - independent of the Prescott Farmers Market - in Skull Valley.

The owners of the Skull Valley General Store, Laurica and Archy McDonald, will conduct a farmers market from 8 a.m. to noon on the first and third Fridays and Saturdays of the month from May 20 through Sept. 17. The store is located at 3030 S. Iron Springs Road.

"I have been to the farmers market in Prescott," Laurica McDonald said. "I think farmers markets in general are a great idea. You will be able to buy local items. And I am trying to see where this idea will go. Maybe this will be the first year and we will be doing it for several years."

McDonald, who has owned the general store since 1994, said earlier this week that seven vendors have signed up and will sell produce and eggs.

She said one of the vendors, Rabbit Run Farm, also sells at the Prescott Farmers Market.

Matt Hyde, who owns Rabbit Run Farm with Sarah Wertz, said, "It's just another market, something we can do and is a little closer than Prescott to support the community here."

He said he will sell lettuce, a variety of greens, chard, kale, cabbage and broccoli during the spring, and tomatoes, peppers, melons, potatoes and carrots during the summer.

Hyde said he and Wertz have been farming for only two years, and gained experience working at Whipstone Farm before striking out on their own.