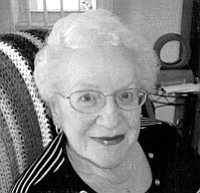 The life of Ruth Edith Boufford, known to her many friends as "Ruthie," drew peacefully and gently to its close in Prescott, Ariz., on May 6, 2011. Ruth was born in Detroit, Mich., on Nov. 27, 1915, the first child of Robert John Brown and Emily Vinewood (Foster) Brown.

She graduated from Detroit's Southeastern High School in May 1933 and soon secured employment in the laboratories of Parke, Davis & Company pharmaceuticals.

Ruth and Wallie had three children, Thomas Robert (Patricia) of Prescott, Ariz., Daniel Wallace, who died just hours after his birth in 1941, and Nancy Jean Sheyachich (Jerry) of Fenton, Mich.

Ruth is survived by her son and daughter; her grandchildren, Robert, Jerilyn and Amy; seven great-grandchildren, Thomas, Kyle, Jeffrey, Daniel, Taylor, Sydney and Tristan; and one great-great granddaughter, Riley.

In accordance with Ruth's wishes, cremation has taken place and there will be no services in Arizona. Memorial services and interment beside her beloved Wallace in the memorial garden of St. Michael's Episcopal Church, Grosse Pointe Woods, Mich. will take place at a later date.

Arizona Ruffner Wakelin Funeral Home assisted the family with arrangements. Friends and family are encouraged to log onto www.ruffnerwakelin.com to sign Ruth's guestbook and share special thoughts and memories.