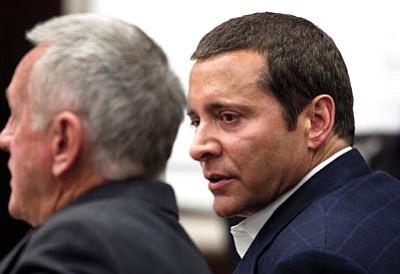 CAMP VERDE - Despite the fact that he would have welcomed additional information when he was conducting autopsies on two sweat lodge victims, Dr. Robert Lyon still has faith in his conclusion that Kirby Brown and James Shore died of heatstroke.

The question remains, though, whether that faith is enough to overcome the state's obligation to prove beyond a reasonable doubt.

"Because you didn't have the relevant information," defense attorney Truc Do asked Lyon during her cross-examination, "you cannot exclude organophosphate as the cause?

Lyon's appearance came on the 19th day of testimony in the manslaughter trial of self-help speaker and author James Arthur Ray, who is accused of causing the deaths of Brown and Shore, as well as that of Liz Neuman, during and after a sweat lodge ceremony at Ray's Spiritual Warrior seminar in October 2009.

Lyon, a Maricopa County Medical Examiner who also does contract autopsies for Yavapai County, performed the autopsies on Brown and Shore the day after they died. And while nothing in his internal and external examinations confirmed the conclusion of heatstroke, he said that circumstantial evidence led to his decision.

Lyon also said that Shore had an enlarged heart, and that he could not say for sure whether that condition contributed to his death.

"He could have had a heart attack on Oct. 8," Lyon said, "but in my opinion the heat caused his death."

Brown, Lyon said, had no such abnormalities. As with Shore, she had no pulse by the time first responders arrived on the scene at the Angel Valley Retreat Center near Sedona.

The initial autopsy reports cited the deaths as an accident, but Lyon was quick to agree that the forensic definition of accident - a death that is caused without intent - differs from the legal version, especially in the case of manslaughter. To convict of manslaughter, the prosecution must prove that a person exhibited a reckless disregard of a known, life-threatening risk.

Delving into the theory that organophosphate poisons are a possible cause of the fatalities, defense attorney Truc Do took Lyon through a timeline of his involvement in the case, from the autopsies he performed the day after the incident, through the four-month period of time in which his conclusion was "pending," to Feb. 2, when he was asked to finalize his conclusion.

He did so, listing the cause of death as heatstroke. The following day, a grand jury indicted Ray on three counts of manslaughter.

Through a series of questions, Lyon said he had not seriously considered any other potential cause of death, saying, "there was essentially no other diagnosis made."

He admitted, though, that it would have been useful to have information that organophosphates had been mentioned, and that the coverings for the sweat lodge had been stored in a shed alongside rat poison.

He said he first received that information from the state "a day or two ago," and that he would have "tested for rat poison."

At the request of the prosecution, Lyon said, he had fluids from the victims tested for organophosphates, but only after the substance had become an issue in the trial. He was informed that it was too late for such a test to be effective as the compounds break down relatively quickly.

He added, though, that in his experience, death from pesticides is exceedingly rare.

"I don't believe I've had such a person in my career," he said.

Do summed up by asking if Lyon could "say it was heatstroke beyond a reasonable degree of certainty?"

Lyon admitted he could not, but added that "until that information comes to light, I would keep that opinion."