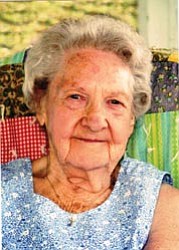 Dorothy Davis entered the Church Triumphant on Friday, March 11, 2011, at age 95. Known to everyone as "Grandma," she used her cast-iron faith to weather the storms of a life not without sadness and tragedy, but also filled with joy and love.

She was born in Chicago, Ill., on Oct. 27, 1915, to Selma and Anton Kratochvil. She spent several years there and went to school up until the eighth grade when she had to quit to help take care of her two younger sisters and her grandmother. After her sisters grew up, she worked in her father's band, where she met her husband, Robert Basham. They lived in various places in Illinois and started to raise a family. In 1945, he moved the family to Prescott because of Dorothy's asthma. After her children grew up, she had an answering service in her home, worked for Chuck and Boots at the Apache Lodge, at Fry's and the golf course. She moved to Clarkdale for some years, then lived in Phoenix until moving back to Prescott n 1989.

She lived by herself in her own home up to the very last. She was preceded in death by her daughters, Lovena and Susie, and her great-grandson Adom.

She is survived by her daughter Kathryn and her husband Jerry; her son Allan and his wife Sally; her grandchildren Mini, Steve, Allan, Cody, Kevin, Lisa, Robert, Jeff, Karene, Chad, Jason and Shirley; as well as many great-grandchildren and great-great-grandchildren - too many to mention by name.