Plenty of pickin' and grinnin' coming to Cordes Bluegrass Fest 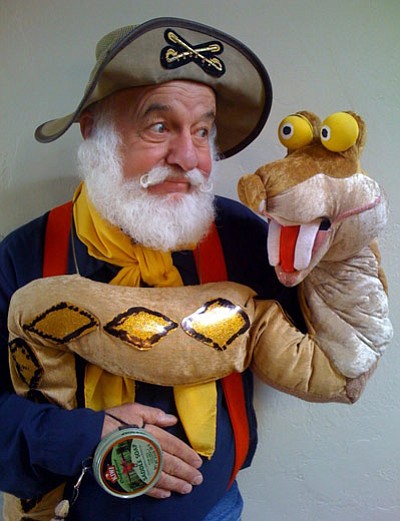 Igor Glenn and his Jazz Cowboys

The Big Bug Mesa soon will be alive - with the sounds of bluegrass tunes.

The final details are coming together for the Arizona Highway 69 Chamber of Commerce's biggest event of the year - the Hi-Country Bluegrass Festival to take place on Saturday, April 16, from 10 a.m. to 6 p.m. at Arcosanti.

Those who attend the spring festival will hear acoustic music at its rollicking best. The Arizona Bluegrass Association describes bluegrass as traditionally containing only acoustic string instruments and vocal components.  The most common stringed instruments include the banjo, guitar, mandolin, upright bass, resonator guitar, fiddle, dulcimer and autoharp.

"The best way to describe it is to hear it," the ABA states.

Cordes Junction businessman Jerry Schultz, who has helped to plan the event from its beginning, is excited about its possibilities.

"This could be a big success to this community. I see this as a way to bring notoriety here, a big event. We already are talking about making it a two-day or three-day event next year. We're getting a lot of calls and a lot of interest," he said.

Featured bands for the Hi-Country Bluegrass Fest include the Hey Boyz, an Arizona-based cowboy bluegrass band that blends and merges lyrics of the old west with country music using a five string banjo, a mandolin, a lead, a rhythm guitar and a wash-tub bass. Its members, who have played together for more than 7 years, range in age from 23 to 65. Between them, band members have played eight European tours. Find more information on the Hey Boyz at www.heyboyz.com.

The Thomas Porter Copper River Band is a Phoenix based bluegrass band. Its

original songs as well as some bluegrass favorites.

The Shuler Family Band is a family singing group with three generations of musicians singing a blend of bluegrass, quartet gospel, country-western and cowboy music.

Paul Shuler, the grandfather of the family, began traveling and singing with his wife Bonieta in 1962.

Paul plays banjo, mandolin and guitar. Bonieta sings and plays mandolin. The two are joined by Colin and wife Gerri, Jacob and his brother Philip, and the three youngest Schulers - Sara, Megan and Thomas.

Igor Glenn and his Jazz Cowboys will serve up western swing music, combining vocal harmonies with stringed instruments and brass horns, according to the band's website. Their music has its roots in regional Americana and appeals to a wide audience. Igor sings in a four-octave range, from a low gospel bass to a high cowboy yodel. He also plays upright "slap bass" as well as guitar, banjo and just about any instrument with strings. Read more about Igor and the Jazz Cowboys at www.igorsjazzcowboys.com.

The Potato Patch Band will round out the day's musical offerings.

Along with the featured Bluegrass bands, which will provide entertainment for all ages, the event will include a number of vendors, food, and jamming on the grounds.

Vendors to date include jewelry, Indian frybread, arts and crafts, raffle tickets for beef, and ice cream, water and soda.

The Chamber is seeking more volunteers to help with the event. For more information on volunteering, vending or sponsorship, or to purchase tickets, call 928-632-4355 or email highway69chamber@gmail.com or visit www.arizonahighway69chamber.org.

Bluegrass comes alive at Saturday festival at Arcosanti
Start yer pickin! Bluegrass is in town
Out & About: Yonder Mountain String Band to play Orpheum
Generation to play on courthouse plaza
Jammin' the Bluegrass Way<BR>Saturday's the day for annual fest