TV ~ Video Games ~ Computers ~ Cell Phones: Principal talks about dangers of too much 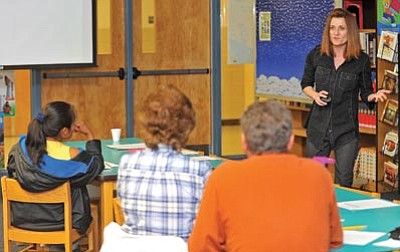 Matt Hinshaw/The Daily Courier<br> Coyote Springs Elementary School Principal Candice Blakely-Stump talks with parents about the effect too much TV, computer or video games can have on children during a parent workshop, “Getting Smart about Screen Time,” Wednesday night in Prescott Valley.

PRESCOTT VALLEY - The students at Coyote Springs Elementary School are on spring break this week.

When they return to class March 21, Principal Candice Blakely-Stump will being preparing them for AIMS (Arizona Instrument to Measure Standards) in April.

Blakely-Stump will ask her students to keep a log of the amount of time they spend in front of a screen - television, video games, computers or cell phones.

The principal also will ask her students to take the "Screen Free" pledge the week before AIMS testing begins.

Blakely-Stump conducted a parent workshop March 9 to talk about the effects of too much screen time. She covered a range of topics from what exactly screen time is to what parents or guardians can do to discourage screen time to the relationship of screen time to childhood obesity and violence.

What people today call screen time previously was know as media time. For obvious reasons, the term was changed to screen time, because young people are always in front of a screen - computers, TVs or cell phones.

The older generation, Blakely-Stump said, sees those devices as tools. Young people, however, are literally "plugged in all day," she said. "They don't even have to pick up a book anymore. They can read on a screen. But, they are missing the tactile feel and smell of books."

What are the effects of too much screen time? Blakely-Stump said the latest research indicates that TV viewing increases the desire for material possessions; it affects self-esteem and body image; it increases the risk for unhealthy sexual behavior; increases the risk of tobacco and alcohol use; and increases aggression and obesity.

Jeanne and Clarence Kinsley are foster parents. They wanted to learn more about the issue surrounding screen time to better help their foster children.

"They want to play games and watch TV," Jeanne Kinsley said. "We try to limit the amount of time they can play games and try to get them outside to play."

The principal reported that with the average home having three TVs, "There are actually more TVs than people."

Between 1980 and 2000, Blakely-Stump said the obesity rates for children doubled, and the rates tripled for teenagers.

"As young people spend more time watching TV and playing video games, they are at a higher risk of being obese," she said.

What can parents/guardians do to limit their children screen time? Blakely-Stump suggests parents act as role models.

"Get outside with your children; make a daily exercise a family event. Create good eating habits for your family by eating together. And most importantly, practice what you preach," she stated.

According to Blakely-Stump screen time has more influence on children than poverty, drug abuse and abusive parents.

"Today's game systems have teenagers acting out murders. Kids are learning how to kill with amazing accuracy without ever picking up a weapon,"

Clarence Kinsley said he does not allow video games that are rated above a child's maturity level. He said he learned a lot of "media stuff and could really buy into the screen log."

As alternatives to screen time, parents can consider face-to-face conversations, family dinners, dinner and a game, family game night, outside activities, a family walk or walking the dog.

National Screen-Free Week is April 18-24. Coyote Springs will be participating in the Screen-Free Challenge the week before AIMS testing.

"Little by little we hope to change people's perception. We know we will only get a small portion of students participating this year. We plan to send letters to parents and use our phone ed system to inform parents about the program.

Anyone interested in more information about screen time and watching the video "A Virus of Violence" can visit www.takethechallengenow.net/video.html.