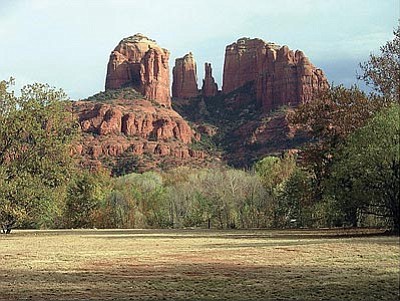 Yavapai County Sheriff's deputies and rescue personnel on Friday found a missing hiker who became separated from his hiking partner and got lost at Cathedral Rock in Sedona.

Kuras told 911 and the Yavapai County Sheriff's forest patrol deputies who coordinated the rescue effort that they had started a hike at Cathedral Rock at 4 p.m. and, after hiking about halfway up the rock formation, Kuras said he could not go further, but suggested his friend continue the hike and that Kuras would wait for him to return, said Dwight D'Evelyn, spokesman for the Yavapai County Sheriff's Office.

The 24-year-old man continued his hike to the top and, when he returned to where Kuras had been, he was gone. The man returned to the trailhead hoping to find Kuras, but he was not there either, so he waited longer and called 911 to report Kuras missing. A YCSO Forest Patrol deputy assigned to coordinate the rescue effort activated the Verde Search and Rescue Posse and five members of the Hasty Team eventually found Kuras at 8:45 p.m., about 60 feet below them in a narrow canyon.

A second ground team was deployed off the Templeton Trail and reached Kuras. After the team determined Kuras was in good condition, despite being cold since he was wearing only a nylon jogging suit, they escorted him to the trailhead parking lot.

Kuras told rescuers that when his friend did not return before sunset, he tried to reach the trailhead parking lot but couldn't find the main trail because of the setting sun. Kuras told rescuers he accidentally took another trail which led into the narrow canyon, and it became dark. Rather than continue to move around, Kuras stayed in one area until help arrived.

The Yavapai County Sheriff's Office reminds hikers to avoid going off alone or leaving a hiking partner. Kuras remained in one spot when he realized he was lost, making it easier for rescuers to find him, D'Evelyn said.

Kuras had a cell phone with him, but rescuers were unable to reach him on it. YCSO dispatchers obtained GPS coordinates from his cell phone, which helped rescuers find him.