Have you seen this sign? Prescott burglaries target antiques 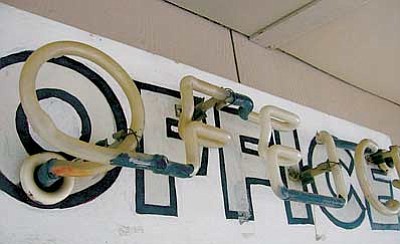 Joe Livingston/Courtesy<br>A suspect stole this vintage neon sign from The Motor Lodge in Prescott in front of the owners who called police immediately.

Recent burglaries in Prescott are targeting antiques and unusual items in people's yards as well as other unsecured valuables, said Lt. Tim Fletcher, spokesman for the Prescott Police Department.

In the past few weeks, suspects stole items including a non-operating Model A Ford from a sideyard, an antique Union 76 gas pump weighing 400 pounds from a fenced yard and an Orange Crush Soda Machine that had been placed for sale on Craigslist.com that was sitting outside a home.

"Antiques are being stolen, but we're also noticing other valuable items being taken," Fletcher said.

Fletcher said while the suspects may find those unusual items easy targets, they may not be as easy to sell as they thought.

"People are looking for opportunities to steal," said Fletcher.

But in some cases even fastening items to buildings with chains didn't stop determined suspects who stole items such as three pedal cars chained to a wrought iron fence, antique wheels chained to a front wall of a home and an antique neon sign attached above the front door of The Motor Lodge in Prescott.

Joe Livingston, owner of The Motor Lodge, said they called police at 3:30 a.m. after his partner Brian Spear saw the suspect standing at the front door taking down their neon office sign last week.

"The guy had taken out the last of four screws that held the sign in place, tucked the sign under his arm, and took off running, jumping over the railing of a 5 to 6 foot porch," Livingston said. "I would never in a million years think that someone would steal our vintage neon sign."

Livingston said they filed a police report and described the man as a Caucasian man in his twenties over 6 feet tall wearing a hoodie, jeans, and tennis shoes.

"There are not a lot of people out there that tall who could take down that sign without a ladder," Livingston said. "He knew what he was doing. We have a light out there that goes off at 3 a.m., and he knew when it would be darkest to take the sign."

Livingston said The Motor Lodge is offering a $500 reward to get back their historic sign, created by A & B Signs here in town more than 50 years ago.

At the same time, police are reporting an increase in suspects entering unlocked vehicles and stealing valuables, Fletcher said.

"It seems like the area is being hit more so in the past month," Fletcher said.

Investigators urge people to lock their vehicles, take valuables out of their cars and into their homes at night and keep items out of plain view as ways to avoid being a victim of theft.