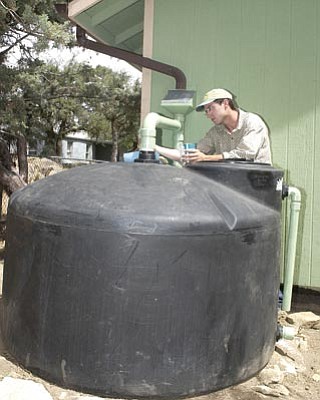 Groundbreaking legislation that could hold the answer to water supply problems across Arizona gained Senate approval Wednesday and now goes to the House of Representatives.

Yavapai County Supervisor Carol Springer of Prescott, the brainchild behind the bill, sees it as an alternative to the costly and controversial Big Chino water pipeline that Prescott-area communities plan to build.

"It will be a new category of water," Pierce said. Local governments and subdivisions could get credit for large-scale rainwater harvesting.

It is moving without amendments despite opposition from the Arizona Department of Water Resources and some resistance from the Salt River Project (SRP), one of the largest water suppliers in the state, although SRP is officially neutral on the bill.

"This has potential," Arizona Department of Water Resources Acting Director Sandra Fabritz-Whitney said. "We just don't have the details and science behind this."

Because a rainwater harvesting water right is a new concept in this country, and perhaps in the world, Fabritz-Whitney thinks the bill is premature, and she would like to see more study first.

Springer, a former state legislator with a long history of water legislation involvement, says it's not necessary to wait.

"I believe it can solve our water problems permanently," Springer said. "If it were successful, there would be no need for a pipeline" from Prescott to the Big Chino aquifer. That project has been controversial because of its potential effects on the Upper Verde River that depends on the aquifer.

Springer was the sponsor of the legislation three decades ago that gave Prescott a unique right to import Big Chino groundwater, because the neighboring Prescott region has few surface water supplies.

The 485-square-mile Prescott Active Management Area (AMA) depends mostly on its groundwater supplies, which it is depleting at the rate of more than 11,000 acre-feet annually, according to a report from a workgroup under the Upper Verde River Watershed Protection Coalition. The coalition consists of Prescott-area governments and Springer serves on it.

The Arizona Department of Water Resources put severe restrictions on new Prescott AMA groundwater uses in 1999. It wants the Prescott AMA to stop depleting its groundwater supplies by 2025.

"We recognize there are issues in the Prescott area, and we've got to identify reasonable alternatives," Fabritz-Whitney said.

Without the legislation, residential wells that are exempt from state restrictions will continue to proliferate and deplete the Prescott AMA aquifer even more, Springer said. The Upper Verde Coalition report noted a widespread drop in Prescott AMA well water levels, too.

"Once it's gone into lot splits, it's gone forever," Springer said of property that has the potential for rainwater harvesting.

Springer's rainwater harvesting idea stems from an analysis by the Civiltec engineering firm in Prescott, which designed a water harvesting pilot study for the Upper Verde Coalition.

Civiltec engineers calculated that if the Prescott AMA could capture annual rainfall in just a three-by-six-mile area, it could eliminate the AMA's annual groundwater overdraft.

The Prescott region loses more than 98 percent of its precipitation to evapotranspiration - a combination of evaporation and plant transpiration, Civiltec calculated.

That adds up to more than 407,000 acre-feet of water each year - more than 17 times what people use in the Prescott AMA.

"It's sustainable water, it's renewable water," Civiltec engineer Doug McMillan said of rainwater harvesting last year. He and Civiltec President Rick Shroads created a PowerPoint presentation about the issue, and they have shown it to dozens of local leaders over the past few years.

Bruce Hallin, SRP's manager of water rights and contracts, has seen the PowerPoint presentation but he believes it has a lot of assumptions.

"There's so much uncertainty associated with the science," Hallin said. "There's a lot of assumptions and theoretical 'what ifs.'"

The issue for SRP and other Arizona surface water rights owners is whether the captured rainwater would have evaporated into the air or eventually made its way into streams such as the Verde River, where SRP has senior water rights.

But Hallin agrees that the amount of rainwater that actually makes its way into streams is low.

"We're interested in any new innovative concepts," he said.

SRP and the Arizona Department of Water Resources cited similar concerns about the bill, saying they want more proof that the rainwater isn't already allocated under Arizona law.

But Springer said there is no need to spend the money to prove the technology ahead of the law. The language in SB1522 allows people seeking the rainwater harvesting rights to provide the proof to the Department of Water Resources.

"Let's leave it up to the open market to see what ideas they come up with," Springer said. "I think it would be a shame for DWR not to support an effort to try to solve our water problem. It's a dereliction of duty."

A Prescott AMA subdivision developer, for example, could require all the homes in the subdivision to feature equipment that harvests rainwater off their roofs, then develop a system to send that water into a groundwater recharge site.

The incentive for subdivision developers would be a 50 percent credit on all the rainwater they collect. For every two-acre feet they put into the aquifer, they would be able to pump one acre-foot back out.

"We believe you can collect enough water to recharge an aquifer and provide new water for future growth," Springer said.

An added benefit would be the ability to recycle and reuse the subdivision water, she noted.

"I believe it can solve our water problems permanently," Springer said. "I believe in my heart that this is the only solution that is economically feasible."