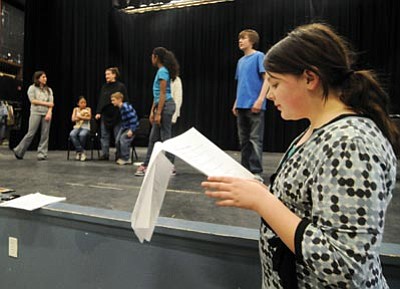 Les Stukenberg/The Daily Courier<br>Young playwright Tiffany Whittemore follows along as the actors go through a rehearsal of her play “The Promise of an Orphan” at Franklin Phonetic School in Prescott Valley Tuesday evening.

PRESCOTT - When Jon Meyer, executive director of the Prescott Fine Arts Association (PFAA), started a Young Playwrights Festival program this past November, he had no idea if it would be a roaring success or a royal failure.

"It's just been tremendous - so much better than I hoped," Meyer said during rehearsals Tuesday evening. "A lot of things have just started coming together in this last week."

In November, children in grades K-12 submitted their 15-page play scripts to a PFAA selection committee. Out of the 22 plays submitted, the committee chose 12 to produce.

The young playwrights are involved every step of the way, from writing and re-writing the scripts and selecting actors to co-directing rehearsals and the live performances, which begin at 2 and 6 p.m. Sunday at Franklin Phonetic School, 6116 E. Highway 69, in Prescott Valley.

"It's just really cool, really neat to watch the words on my page come to life on the stage," said Tiffany Whittemore, a seventh-grader at Prescott Mile High Middle School. "I wrote the play in four evenings, and it's 12 pages long. I have six kids and two adults in it."

Tiffany's play, "The Promises of an Orphan," centers around six orphans who are involved in an open adoption event. A lady decides to adopt one little girl, but refuses to adopt her sister, which results in some emotional scenes involving the separated sisters.

"My parents have foster kids, but the story isn't about a real thing," Tiffany said. The sophisticated script switches between serious, tragic, humorous and a touch of slapstick.

"I like to write everyday stories," said the aspiring writer. And she gives the play a happy ending.

"I like happy endings," she said with a smile.

Adults who have acting, directing or producing experience volunteered to work with each young playwright. Meyer and Tiffany co-direct her play.

During the rehearsal, Meyer would shout, "Lights up - lights down," simulating stage lights used during the actual performance that cue the actors during each scene. Afterwards, he critiqued the six children and two adults about their performances.

Lisa Lanning, a mother of one of the young playwrights, is one of the adults in Tiffany's play. She makes her stage debut Sunday.

"I'm very nervous up there," she said after the rehearsal. "I've got a new appreciation for actors. It's not as easy as it looks."

Meyer gave Lanning some individual acting tips to help her succeed in her first stage performance.

"I've always wanted to try acting, even in high school," she said. "It's a lot of work, but it's a lot of fun. And all the kids are just awesome."

Mary Timpany, the other adult in Tiffany's play, has previous theater experience. She didn't mind taking direction from a seventh-grade playwright.

"I love it - all the enthusiasm the kids have," Timpany said. "Tiffany did a great job. And I know the play is kind of close to home for her."

Meyer encourages school educators who are involved with performing arts to call him about coming to the Sunday performances and "watch the process." Meyer can be reached at 541-0209.