Bill's Pizza gets a slice of victory at expo 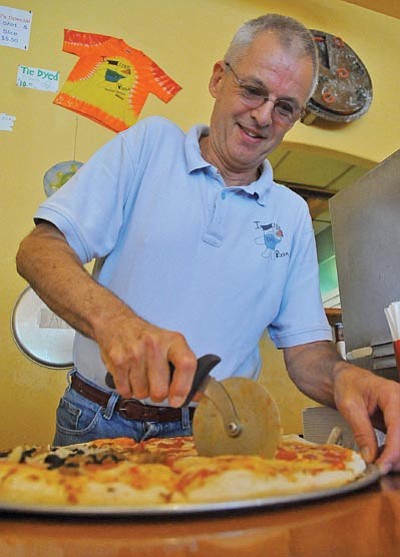 A pizza named for a pop artist shot to the top of its own chart.

Brian Getz, a chef at Bill's Pizza in downtown Prescott, got some big recognition for his Elton John pizza this week at the 27th annual International Pizza Expo in Las Vegas.

Getz entered his creation in the non-traditional category of the pizza-making competition against 64 other pizza chefs from around the world.

"That was my creation - that was the one that I wanted to make," he said.

The pizza made it to the top eight, and Getz was ecstatic.

"I was more proud of myself than I've ever been," he said. "I just never felt anything like that. It definitely shows me that we really do know what we're doing."

The guys at Bill's Pizza are making pies that are garnering recognition in Prescott and beyond. Back in mid-October, owner Bill Tracy talked to the Courier after his eatery made the list of Popular Plates magazine's list of "100+ Can't-Miss Pizzerias," a coast-to-coast guide highlighting pizzerias. Tracy said the Elton John is the best-selling pizza at the restaurant.

Getz created the pizza that's made with roasted garlic infused with olive oil, artichoke hearts, tomatoes, cooked spinach, red onions, feta and four cheeses, and named it after the singer because one of Elton's songs was playing when he invented it.

Tracy said he encouraged Getz and Steve Helland, a pizza chef at Tracy's Palm Springs restaurant, to go to the event.

"To be picked in the finals was really exciting," he said. "I just wanted those guys to have a good time, and to get recognized is absolutely incredible."

Getz said he had 15 minutes to prepare the pizza and 20 minutes to bake it during the competition.

"I was not expecting to hear my name called in the finals, so when I heard it, I was definitely pretty much in shock and just happy," he said.

Getz, 34, said he began cooking 16 years ago, and the recognition from the competition means a lot to him.

"Over the years, all of the passion and putting the love into it, it all paid off and showed that we're doing some of the best pizza in the world," he said.

For information, call the pizzeria at 443-0800, or visit www.billspizzaprescott.com or www.pizzaexpo.com.