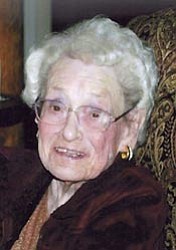 Mae met and married Herman Meredith (the love of her life) in Tulsa, Okla., in 1937. In 1941, Mae and Herman moved to Phoenix, Ariz., bringing with them their two sons, Tommy and Ted. Their daughter, Janice, was born in Phoenix. They lived there for 68 years.

Mae was never the president, chairman or manager of anything (except her church); her complete dedication was to her husband and her family. She never applied for a driver's license, choosing to be home for her children and grandchildren. Her home was always open for them, particularly during the holidays.

You never saw Mae unless she was beautifully dressed, hair done and her makeup on - right up to her last day. She was a very proud lady and was loved by everyone who knew her. She was rewarded with 98 years of exceptional health and the total respect and love from ALL her family. Her family and friends would say, "Never a kinder and more respected person did we ever know."

A viewing for Mae will be on Friday, March 4, 2011, from 10 to 11 a.m. at the Jesus First Church, 498 W. Missouri in Phoenix, Ariz., with a service to follow at 11 a.m. A committal service is to follow at Greenwood Memory Lawn Cemetery. The family suggests that donations be made to the Jesus First Church in Mae's name. A special thanks to the caregivers at Margaret T. Morris Adult Center in Prescott.

May God be with her, as she joins her husband, son and son-in-law in a better place.