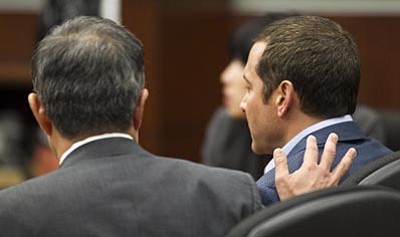 CAMP VERDE - Jurors in the trial of James Arthur Ray were unable to reach a decision Wednesday on the aggravating factors the state alleges apply in Ray's sentencing. That same jury last week found Ray, 53, guilty on three counts of negligent homicide in the deaths of Kirby Brown, James Shore and Liz Neuman, who died after a Ray-led sweat lodge ceremony near Sedona in October 2009.

Deliberations began shortly after noon, following closing arguments from Yavapai County Attorney Sheila Polk and defense attorney Tom Kelly. If jurors approve any or all of the three circumstances the state alleges, Judge Warren Darrow can sentence Ray, a once-prominent self-help speaker and author, to a prison term longer than the normal 2.5 years per count. Darrow also has probation as an available option.

The three alleged aggravating factors are that Ray committed the crime for monetary gain, that he caused the victims' families emotional harm, and that he was in a unique position of trust during the event that led to the deaths.

In her last opportunity to address the jury before the decision, Polk drove home her points.

"So ask yourself," she said. "What was the defendant selling, and how did he get the victims to do what he wanted them to do?"

Polk maintained that Ray laid out his five-day program at Angel Valley with profit in mind and charged his clients $10,000 each.

"The events of the week were like a pyramid with the sweat lodge on top, designed to make the participants believe they got something for their money," she said.

On the matter of Ray's position of trust, Polk pointed to the testimony of several sweat lodge participants, including Mike Oleson, Dennis Meharvaer, Scott Barratt and Beverly Bunn, who said they trusted Ray to keep them safe.

In the end, Polk touched on the Tuesday testimonies of Brown's mother, Neuman's daughter and Shore's wife, all of whom detailed the emotional impact the deaths have had on their families.

"Mr. Ray," Polk said, "took their trust, and their dreams, and the lives of Kirby Brown, Liz Neuman and James Shore."

In his own closing, defense attorney Tom Kelly expressed just a bit of the frustration he was feeling.

"I have difficulty finding there was any criminal act," he said, "so that makes it difficult ... to stand up here and talk about aggravating circumstances."

Nonetheless, Kelly did say "this is not a case where a murder was committed in order to make money," and that had Ray done so, that would constitute "a very poor business model."

Kelly emphasized that in any death, families suffer, and that the emotional harm in this case was not sufficient to hold his client to a higher standard. In the end, he reiterated the defense position that people have free will, and Ray did not prevent anyone from leaving the lodge.

"This is a nation of risk-takers; it's what makes us great," he said, adding that "the implications are beyond comprehension" if a leader or guide who presides over an event that leads to a fatal accident can be imprisoned for a crime.