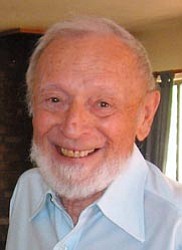 He graduated from Berkeley with a B.S. before serving in the United States Army from 1943-1946 during World War II.

Arthur then went back to Berkeley, where he obtained his Ph.D. in nuclear physics. He was an assistant at Berkeley and then went to San Jose State. Arthur worked 11 years for Sylvania in research and then SRI (Stanford Research Institute). He had numerous patents while working for SRI.

Arthur then taught electronics at San Mateo Community College and in 1979 moved to Prescott and taught at Yavapai Community College for about 8 years. After he retired, Arthur taught physics at Embry-Riddle Aeronautical University.

Arthur is survived by his wife, Margaret, of 39 years.

A memorial mass will be 11 a.m. Friday, July 1, 2011, at the Northern Arizona V.A. Chapel in Prescott. A private inurnment will take place at the Prescott National Cemetery.