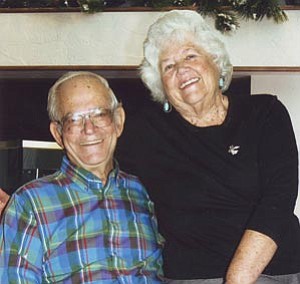 Mary Felippi and Jim Keegan will celebrate their 60th wedding anniversary on June 30, 2011. They were married in Hernando, Miss., in 1951 while Jim was serving in the Navy. Both are graduates of Prescott High School, class of 1949. Jim spent 35 years with Airesearch (now Honeywell). After raising her children, Mary went to work for the State of Arizona. Upon retirement they have resided in Prescott for the past 20 years.

They had three children, Carolyn Paige, David (deceased), and Brenda Burris. They have four grandchildren and two great-grandchildren. A family celebration will be at Monti's La Casa Vieja in Tempe, and an open house is planned at their daughter's home in Mayer in July.