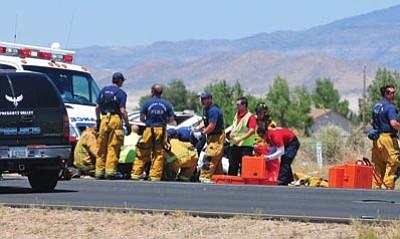 Les Stukenberg/The Daily Courier<br> Emergency personnel treat the victims of a one-vehicle rollover on Glassford Hill between Long Look and Spouse in Prescott Valley Friday afternoon. One person died at the scene and another was airlifted to a hospital.

Prescott Valley police are investigating a rollover that killed one person and sent another with apparent serious injuries to a hospital Friday afternoon, Sgt. Brandon Bonney said.

Both the driver and passenger were ejected from the vehicle in an accident that occurred around 2 p.m. Friday at Glassford Hill Road and Spouse Drive, he said. Police reported one person dead at the scene while a medical helicopter took the other person to an unidentified trauma center.

Bonney said police do not know whether the two were wearing seatbelts, and could not identify the make of the vehicle.