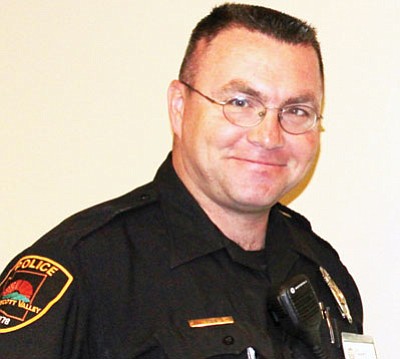 MATFORCE announced that Prescott Valley Police Officer James Tobin has been named the Northwest Alcohol Conference's Community Leadership Co-Winner for 2011. This award recognizes outstanding individuals who have been instrumental in reducing underage drinking and substance abuse.

The Northwest Alcohol Conference meets in Scottsdale on July 14 and 15 where Tobin will receive his award. The Conference features individuals and groups from across the western United States, who address alcohol education, prevention and enforcement.

MATFORCE nominated Officer Tobin for his outstanding leadership in reducing underage drinking in Yavapai County. Tobin has served as a volunteer on the MATFORCE Underage Drinking Task Force since 2007 and currently serves as its Chair.

MATFORCE Executive Director Merilee Fowler said, "Under Tobin's leadership, MATFORCE implemented a community-wide campaign that has led to a 12 percent decrease in underage drinking among Yavapai County youth according to the 2010 Arizona Youth Survey 30-Day Use data."

Tobin said his goal is to save the lives of area youths. He had a "near miss" in his own youth from underage drinking, he said, and he understands the risks and choices youths face.

One of Tobin's efforts helped establish the MATFORCE Youth Alcohol and Drug Impact Panel. Tobin teaches teens and parents who attend these classes about the impacts of drinking or using drugs and driving. He provides a realistic viewpoint on the legal consequences and personal risks. He also invites a speaker, who has been seriously affected by a DUI incident, to talk with the audience about the real life results of using drugs or alcohol. These presentations are held monthly, alternating between Prescott Valley and Cottonwood.

Fowler said, "We commend Officer Tobin for his outstanding leadership and dedicated service to the youth and families of our community. As a MATFORCE volunteer, Tobin joins with MATFORCE's many other community partners working to reduce substance abuse throughout Yavapai County."