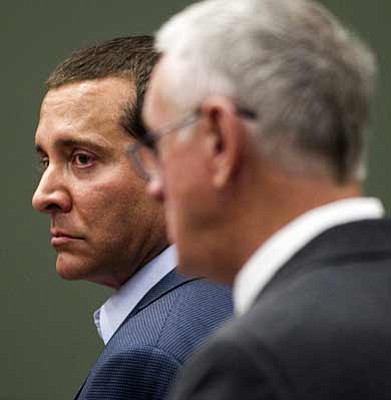 Tom Tingle/The Associated Press<br>James Arthur Ray, left, and his attorney, Thomas Kelly, right, stand in the courtroom of Judge Warren R. Darrow, in the Yavapai County Courthouse in Camp Verde Wednesday. The sweat lodge trial that has been going on for months was handed to the jury Tuesday.

CAMP VERDE - After little more than seven hours of deliberation, jurors found motivational speaker and author James Arthur Ray guilty of negligent homicide, and not guilty of the more serious charges of manslaughter.

Ray, 53, was on trial over the October 2009 deaths of Kirby Brown, James Shore and Liz Neuman, who passed away after a Ray-led sweat lodge ceremony at the Angel Valley Spiritual Retreat Center near Sedona.

Ray, who remained seated for the announcement, reacted with just a quick, deep swallow as the verdicts were read one by one. He appeared to be blinking back tears by the time the court clerk gave the final verdict of guilty for the negligent homicide of Shore.

Judge Warren Darrow dismissed the jury for the day, but cautioned them that their work is not yet done. A hearing, expected to last two days, will begin Tuesday morning, during which jurors will consider approving possible aggravating factors to present to the court at sentencing.

If Darrow chooses to recognize aggravating factors with the Class 4 felony conviction and run the sentences for each victim consecutively, Ray could face as long as 11.25 years in prison. The presumptive (normal) term is two years per offense, and all counts are probation-eligible.

Yavapai County Attorney Sheila Polk, who conducted a vigorous, four-month-long prosecution in the trial, which began after 17 months of investigation and preparation, asked that Ray be taken into custody immediately after the verdict.

Polk, as well as the defense team of Luis Li, Truc Do and Tom Kelly, all declined comment. Polk cited the gag order that has been in effect since before the trial began.

Ray and his parents exited the courthouse by a side door, evading a swarm of television cameras that waited outside the main entrance.

The trial began with jury selections on Feb. 15, and opening statements took place on March 1. The proceedings were complicated by numerous defense motions for mistrial, the most notable of which occurred in mid-April, when Darrow found that the prosecution had committed a disclosure violation by withholding possibly exculpatory evidence from the defense. The most recent mistrial motion was denied on Wednesday.

Eighteen participants in the ill-fated sweat lodge testified during the trial, as did numerous doctors, investigators and Angel Valley staff. The retreat owners, Michael and Amyra Hamilton, also testified for the state.

"The outcome of this trial will never bring 'closure' to our grief," McFeeley wrote. "There is no way to fill the enormous hole that Kirby's death leaves in our family. Our hearts are forever broken by her death, just as our lives are forever blessed by her life."

McFeeley said earlier in the day that he expects the issue to continue in an appeals court. He expressed respect for the way Darrow conducted the trial, noting that "it was clearly Darrow's intent to make a clear record so people can't change their arguments later."

Before they began their deliberations on Tuesday, jurors listened intently as Polk said, "We do not have to prove that Mr. Ray knew people were dying."

The legal definition of manslaughter requires proof that Ray "caused the death of another person and was aware of and showed a conscious disregard of a substantial risk that his conduct would cause another person's death."

Negligent homicide, on the other hand, requires proof that the defendant "caused the death of another person and failed to recognize a substantial and unjustifiable risk that his conduct would cause the death."

Jurors apparently recognized a distinction between awareness and failing to recognize and came to a decision that satisfied other representatives of the victims.

"I'm very pleased," said Lilly Clark, Liz Neuman's cousin, who has attended virtually all of the trial sessions. "We wanted to see the system work and we believe it has. We wanted a righteous conviction and we got one."

Randy Neuman, who was divorced from Liz after 23 years of marriage, was also present to see the verdict, having traveled from Minneapolis to lend his support.

"I spoke with our kids and they were pleased with the verdict," he said. "We think it was very fair."

And Mika Cutler, who traveled from Utah for much of the trial and described Kirby Brown as her best friend, said she was content with the result. She complimented the jury on their perceptiveness.

"I'm very happy the jury got to see behind the smoke and mirrors the defense put up there," she said. "The courtroom is not a place for gamesmanship and Sheila Polk respectfully did not participate. She gave the facts and she gave the truth. Three people died and this is not a game. She didn't have anything to do with their antics."

Polk plans to call as many as nine witnesses at the aggravation hearing next week, possibly including Kirby Brown's mother, Virginia.