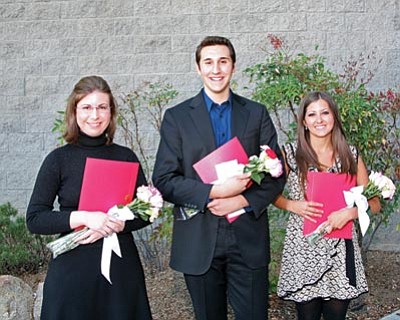 Caia Decker, a student at Northern Arizona University, was awarded the association's first classification scholarship at a presentation in May. She has completed her second year at Northern Arizona University, majoring in music. She is studying voice and working toward a bachelor's degree in choral music education with emphasis on piano performance.

The second classification scholarship went to James Grandjean, a student at Oklahoma City University. He is working on a bachelor's degree in music, majoring in vocal performance and musical theater. He was the recipient of this award in 2010.

Katherine E. Meyers, a graduate of the University of Arizona, won the third classification scholarship. She will be entering graduate school to complete a master's degree in violin performance. Her professional goal is to be a classical violinist in a full-time professional orchestra.

The special scholarship fund award was given to Nathanael R. Gross. He has a double major, pursuing both a bachelor's degree in music performance and an engineering degree at the University of Arizona.  After graduation, he plans to get a teaching certificate and teach high school choir, math and science.  He was a co-recipient of the first classification YSA music scholarship award in 2009.

The scholarship recipients were introduced and presented with their scholarship certificates at the start of the Phoenix Symphony concert held May 22 at the Yavapai College Performance Hall.

The Yavapai Symphony Association sponsors seven concerts each season by the Phoenix Symphony.

For more information on the scholarship program or the concert series sponsored by the Yavapai Symphony Association, contact the office at 776-4255.