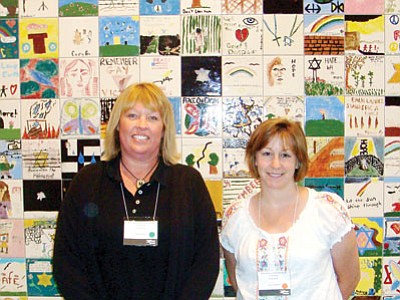 Mardi Read, left, Granite Mountain Middle School teacher, and June Lombardi, Bradshaw Mountain High School teacher, stand in front of the Children’s Tile Wall at the Holocaust Museum in Washington, D.C., during a training conference in June 2009. The Jewish Community Foundation of Greater Prescott honored both teachers on May 3 during the Days of Remembrance program at the Yavapai College Performance Hall.<br> Courtesy Photo

Prescott Valley resident June Lombardi had the honor of lighting one of the six yahrzeit, or ceremonial, candles during the Days of Remembrance program on May 3 that honors victims of the Holocaust. Four teachers and two librarians participated in the candle lighting, including Lombardi, who just finished her first year at Bradshaw Mountain High School where she teaches English.

While teaching English and History with the Chino Valley Unified School District, Lombardi had applied for special training through the Holocaust Museum in Washington, D.C. She and Mardi Read, a teacher at Granite Mountain Middle School, spent three days training in D.C., and have stayed in touch with the Jewish Community Foundation of Greater Prescott, which sponsored the trip.

The tradition of lighting candles to honor the dead dates to the 16th century, and the six candles lit at the Days of Remembrance honored the six million Jews who died during the Holocaust.

The program states: "These teachers and librarians recognize the Holocaust provides a context for exploring the dangers of remaining silent, apathetic, and indifferent in the face of the oppression of others. They realize that democratic institutions and values are not automatically sustained, but need to be appreciated, nurtured, and protected, because democracy is fragile."

Lombardi said the training she received also included current history such as recent tragedies in Bosnia and Rwanda.

"It is a relevant issue. Events like that (mass killings) are still taking place all over the world," Lombardi said.

As a teacher, she is able to reserve seats for her students at Days of Remembrance ceremonies. She said 65 students and family members attended this year's presentation by Thomas "Toivi" Blatt, a Sobibor death camp survivor and author of Escape from Sobibor: A Survivor's Story.

She encourages her students to attend, and said, for the most part, she sees positive reactions.

"Kids are like, 'Oh, I don't know.' After they go, they always take something away from it. This time they said, 'I want to see the whole movie,'" she said. She lends out her personal copies of the movie made from the book and the book.

"It sparks a conversation that might not come up in the English classroom. It's a good way to bring history and reality into the classroom. Sometimes you lose the connection to the real world," Lombardi said.

Recent news of the conviction and 5-year sentence of John Demjanjuk, 91, a Sobibor guard, linked Blatt's history at the camp to present-day events.

"It seems like such ancient history to kids today, and then you see it in the news," she said.

Another connection to Holocaust history was through Lombardi's offer of extra credit for reading Maus, a graphic novel by Art Speigelman. About a dozen students worked on it, and many of them attended the event.

"When he (Blatt) was talking about being scared to go to Hungary, they saw it was same thing that happened in the (Speigelman) book," she said.

At a luncheon before the evening's program, Lombardi and the other candle lighters met Blatt, his family and other local survivors. Blatt talked about his life and his trips to Poland, speaking Yiddish with other Holocaust survivors.

Lombardi grew up in a community just north of New York City where many Italian, Irish and Jewish people also lived. She still uses bits of Yiddish in her everyday speech.

"I thought that's how it was everywhere. Then I came out here and wow, it was really different," she said.

She studied History at the University of Maryland, and went to the Czech Republic as an exchange student where she stayed for two years before returning to the U.S. to finish her degree. While in Europe, she visited the Auschwitz and Birkenau extermination camps, and the Jewish Ghetto of Krakow. After graduation, she taught English in Russia for three years, spending time in Tyumen, the oldest Russian settlement in Siberia, and again traveling in Eastern Europe.

This past summer she visited the Balkan area - Prague, Hungary, Croatia, Albania, Herzegovina - and into Greece and Turkey.

"It was amazing. It's the one thing I'm willing to rack up a credit card for," she said. "I tell the kids all the time, 'If you knew your teachers, you'd think they are really cool, beyond just old,'" she said with a laugh.

Congress enacted a national recognition of Days of Remembrance in 1980, and officially observes a specific week each spring to commemorate those who perished in Nazi Germany.