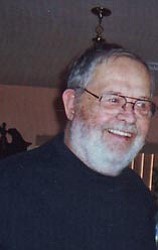 Bill graduated from Birmingham High School in 1952. He then became the fourth generation in his family to attend Albion College, where he was a member of the Alpha Tau Omega fraternity and co-captain of the swimming team. He transferred to the University of Michigan and graduated in 1956 with a BS in electrical engineering.

He returned to school at Western States University, earning a JD degree in 1980. He practiced law in Orange County, Calif., before retiring in 1995.

Bill was a Power Squadron instructor in Newport Beach for several years.

After retiring, he and Shirley traveled the Pacific and Atlantic oceans for five years in the "Shirley L" (a Newport 246 sailing vessel) from Newport Beach, Baja and the Sea of Cortes through the Panama Canal to Cartagena, Columbia, and back up to the east coast of the USA.

In 1994, Bill and Shirley moved to Arizona, where Bill became an accomplished bass player. They traveled the country in their motor home, attending bluegrass festivals and loving the time they spent with treasured friends who shared their passion for the music. For several years, Bill has been learning to play the dobro. He held weekly jam sessions with his friends and neighbors every Wednesday until two weeks before he passed away.