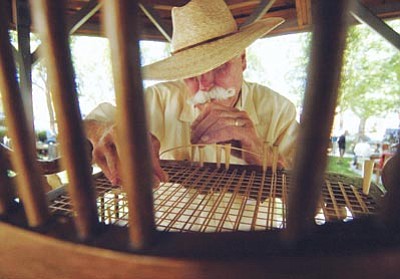 Les Stukenberg/The Daily Courier<br>Dennis O’Reilly demonstrates the art of caning a chair during the 2010 Folk Arts Fair at Sharlot Hall Museum in Prescott. This year’s fair runs 10 a.m. to 5 p.m. Saturday and Sunday.

In the old days, Prescott was called a village, and a living history of yesteryear will spread across the grounds of Sharlot Hall Museum on Saturday and Sunday for the 38th annual Folk Arts Fair.

This year's fair will feature different areas of the museum campus devoted to life as it was in 19th-century Prescott.

The 5th U.S. Cavalry, Company A, General George Crook, the Arizona Rangers, the Prescott Regulators and the Arizona Rough Riders will be a part of a military encampment in the Frontier District.

Lawn games and a player piano will provide entertainment in the Society District, where the Elks Guild Ladies, Shady Ladies and Victorian Society will greet visitors in garb of days gone by. In another part of the museum's sprawling lawn, where the Farm and Fiber District sits, attendees will learn the art of rug braiding, fiber dyeing, spinning, crocheting, tatting, weaving and quilting, while in the Craftsman District, fairgoers will watch wood carving, candle dipping, tin punching and cornhusk toy-making.

The Primitive Living District will demonstrate fire-making, corn grinding, pine needle basketry and basket weaving, and in an area that men will enjoy, the Machine District, hit and miss engines will fire up alongside vintage classics of the Prescott Antique Auto Club.

Prescott Frontier Days will have a presence in an area set aside for roping demonstrations, and the fest's signature cowboy Dutch oven biscuits and coffee will be available.

"For 38 years, this museum has been doing this," said Jody Drake, the museum's curator of education. "Three generations of families" have participated in the fest, she said. "Now children are bringing their children."

"Everything is taking everybody back to the 19th century," Drake said. "Living history will be all over the campus."

The two-day festival is "an incredible lineup of people who give their time to share their heritage with everybody's hometown," she said.

This year's fair is dedicated to the late Karen Clymer, a sheep shearer who had taken part in the fair almost since its beginning. The event's presenting sponsor is Pinion Painting, which donated its services to paint the museum's 1875 Frémont House.

Other than admission, the only cost for the two days will be for people who buy food, provided by El Charro restaurant.