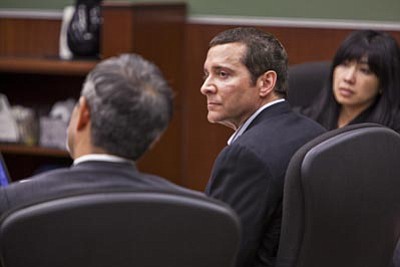 Jack Kurtz/The Associated Press<br> James Ray sits in court with his lawyers Luis Li, left, and Truk Do during his trial March 2 in Camp Verde, Ariz.

Ray, 53, was convicted on June 22 of negligent homicide for the October 2009 deaths of Kirby Brown, James Shore and Liz Neuman after a Ray-led sweat lodge ceremony at a retreat center near Sedona.

During a telephonic hearing Friday, Darrow set Aug. 16 for the legal arguments on the heels of legal briefs filed by Ray's attorneys and the Yavapai County Attorney's Office earlier this month. That hearing will preclude the previously scheduled July 25 sentencing date.

Ray faces as long as nine years in prison over the charges, but also is eligible for probation. Shortly after the conviction, the jury found that the state, through Yavapai County Attorney Sheila Polk and her team, had proved one of three potential aggravating factors, that the victims' families had suffered emotional harm.

The defense motion for a new trial cited 10 specific acts by the prosecution, including prosecutorial misconduct and disclosure violations, that denied Ray's due process rights during the four-month proceeding. The state's response argued that even if the alleged acts did occur, they were harmless and did not prejudice the jury against Ray.

If Darrow rules against a new trial, the next step in the case will be a pre-sentence hearing. Defense attorney Tom Kelly said during Friday's hearing that the defense will call as many as 18 witnesses and requested three days to present a case for mitigation. Polk asked for equal time, and Darrow seemed likely to schedule that weeklong proceeding for early in September.

Polk also said that her office is "quite frankly in a reactive mode" and has not yet received disclosure about the proposed defense witnesses. Kelly acknowledged that the defense has not yet filed its formal motion, naming the witnesses and the mitigating factors they hope to give Darrow for consideration at sentencing.

Statutes call for sentencing to take place within 30 days of a conviction, and Polk argued Friday that she had concerns about extending that time because of the impact on the victims' families. Staying within that timeline would require a mitigation hearing to take place almost immediately after the Aug. 16 arguments.

Darrow, though, said he believed he could waive that time restriction with good cause, but stopped short of setting a sure date for sentencing.