Column: Tiger hoping for luck of the Irish 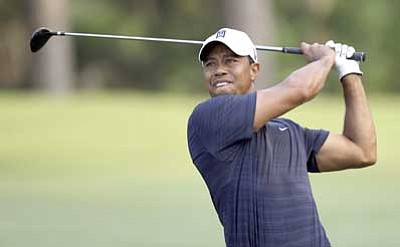 Tiger Woods was reported to be entering next week's Bridgestone to prepare for the PGA Championship. He's lost his endorsements, his wife, his swing coach and caddie. Tiger is so desperate to win a major title he's at the driving range each morning practicing his Irish accent.

Brett Favre's agent in Mississippi denied rumors that the quarterback might sign with the Philadelphia Eagles as a back-up to Michael Vick. We're all familiar with the cycle now. The four seasons in Mississippi are spring planting, comeback, playoff interceptions and retirement.

Pastor Joe Nelms thanked the Lord for his smoking-hot wife during his invocation Sunday before a televised NASCAR race. He also prayed for the Firestone tires, the Fords and Toyotas. Southern Baptists love repeating the invocation so much they risk becoming a liturgical church.

McDonald's restaurants caved in to the food police and White House pressure on Monday and announced that its Happy Meals will no longer include French fries but now have apple slices. Don't worry. McDonald's made up for it by putting fries and cheese in their apple fritters.

Captain America topped the worldwide box office about a Marvel Comic hero battling the Nazis in World War II. The premiere was spectacular. For the first twenty-four hours the Oslo police were working on the assumption that the terror attack was a publicity stunt for the movie.

The White House press briefing erupted in chaos Tuesday when President Obama refused to offer a debt ceiling solution. The argument has split the GOP and divided Democrats. No one wants to say the debt ceiling debate has been a total disaster, but al-Qaeda just took credit for it.

President Obama addressed the nation Monday and ripped the GOP Congress for the debt ceiling crisis. The president incited partisan rancor by saying John Boehner can't control his caucus. Republicans were outraged that he would leak John Boehner's medical records like this.

President Obama tried to scare Republicans into raising the debt ceiling Monday. He told the nation the debt crisis will force him to stop sending out Social Security checks so he can pay the bills. Baby Boomers always solve their problems by asking their parents for the money.

Capitol Hill was flooded by angry calls Tuesday demanding spending cuts. The president's hoped-for phone pressure for a compromise with tax hikes never materialized. People do not punch redial for an hour just to finally get through and demand that we split the difference.

Jeb Bush refused to rule out running for president next year. He had to see Prince William and Kate being welcomed like liberators in Los Angeles. Whenever Americans get nostalgic for hereditary monarchy, the Bush family's next-in-line pops up from the earth like a sunflower.

Michele Bachmann reported Tuesday she spent five thousand dollars on hair and make-up when she began campaigning in Iowa. She also takes mood-elevating prescription drugs. She's tired of hearing Republicans refer to Sarah Palin as either the pretty one or the happy one.

General Electric CEO Jeff Immelt announced plans Tuesday to move its X-ray factory from New York to China. He's Barack Obama's adviser on U.S. job creation. Last year he advised the president to encourage the unemployed to move to China so they can work for General Electric.

U.S. Congressman David Wu resigned after an eighteen-year-old girl accused him of having unwanted and aggressive sex with her. He's the first Chinese-American elected to Congress. The next time China plants a spy in the U.S. Congress they're going to do a background check first.