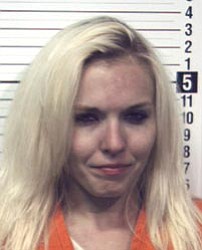 Prescott police booked Stevie Lynn Caylor, 25, of Prescott into the Yavapai County Jail in Camp Verde on July 21 on charges of forgery and fraud schemes after she tried to buy oxycodone at a pharmacy with a forged prescription.

At 6:21 p.m., an officer answered a call about an alleged fraud in progress at the Safeway pharmacy on White Spar Road and spoke with a pharmacist who showed him a photocopied prescription for 180 15-mg oxycodone pills that Caylor had presented him instead of a genuine prescription, according to the police report.

Caylor initially told the officer that she had not photocopied the prescription, but later said she had made a copy of the original prescription, said Lt. Andy Reinhardt, spokesman for the Prescott Police Department.