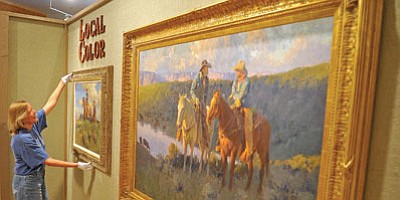 Matt Hinshaw/The Daily Courier<br>Kim Villalpando, executive director of the Phippen Museum, hangs “Ride to the Cattle” by Bill Anton in the “Local Color” exhibit Wednesday afternoon at the Kemper and Ethel Marley Western Art Gallery inside the Phippen Museum in Prescott. The opening reception for “Local Color,” “Native Myths and Legends” and “Solon H. Borglum Collection” will be today from 5:30–8 p.m., and is open to the public.

The Phippen Museum will unveil three new Western art exhibits and show off its newly completed addition at a grand opening reception for the public from 5:30 to 8 p.m. tonight.

This exhibit will be on display in the new Kemper and Ethel Marley Western art gallery through Oct. 30.

"Native Myths and Legends," which will be on exhibit until Oct. 16, presents the works of six different prominent Native American artists from around Arizona. These artists use unique art forms and varied techniques to explore their rich cultural heritage and traditions in this returning exhibit to the museum's George Phippen gallery.

"Our Native Myths and Legends II" exhibit features artwork from some of the most talented American artists working today," said Kim Villalpando, the museum's executive director. "We are extremely lucky to live in a community that has so many gifted Western artists. 'Local Color' is the perfect exhibit to showcase their individual talent and unique artwork."

People who have an appreciation for the Rough Rider monument on the Yavapai County Courthouse Plaza will enjoy the third exhibit, the Solon H. Borglum collection in an area of the Phippen Museum that was specifically designed for these items.

The recreation of Borglum's studio houses his sculpture stand, plaster pieces, his buffet and other personal memorabilia from his life.

The Phippen Museum has a long-term agreement with the Prescott Area Arts Trust to house the Borglum pieces.

In the eyes of some, Solon Borglum's talent was eclipsed by his older brother, Gutzon Borglum, who designed Mount Rushmore.

However, "Solon's realistic sculptures of Native Americans, cowboys and North American wildlife won him tremendous accolades in 19-century Europe," Villalpando said. In the early 20th century, Solon began to focus on creating monuments, such as the Captain William Owen O'Neill Memorial, now commonly referred to as the Rough Rider Monument, she said.

"We are excited to have to have it here," Villalpando said of the acquisition of Borglum's historic belongings.

The new addition to the museum adds 6,000 square feet of new gallery space and now "makes it possible for the museum to run concurrent shows and offer a wider variety of artwork for the public to enjoy," Villalpando said.

"All of these positive new developments, including the addition of the new Solon H. Borglum collection room, have been made possible through the collaborative effort of our dedicated staff, outstanding volunteers, knowledgeable architects and builders, and an impressive collection of community-minded individuals from throughout the surrounding area," she said.

The grand-opening event is free to all Phippen Museum members, $15 for non-members, and will include a presentation from Old West speaker, humorist, author and artist Bob Boze Bell of True West magazine.

The museum is located just north of downtown Prescott at 4701 Highway 89 North. For more information, call the museum at 778-1385 or visit www.phippenartmuseum.org.