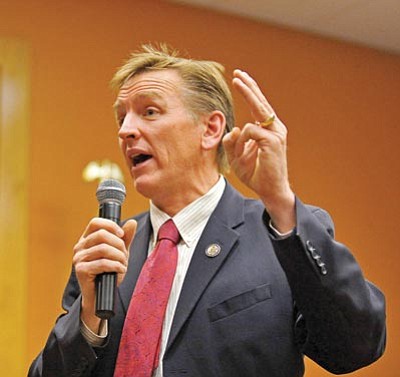 In exchange for the increased debt ceiling, HR2560 would make immediate cuts of $111 billion, require Congress to approve a balanced budget amendment to the Constitution, and require a two-thirds vote of each chamber to approve future tax increases.

"History shows us that without this amendment, those drunk with federal spending, those intoxicated with endless borrowing, and those addicted to federal largesse, cannot stop," Gosar said in a news release Tuesday.

The House approved the bill on a vote of 234 to 190, but it's unlikely to get approval from the Senate, let alone the president.

Gosar told The Daily Courier that Obama has "backed us in a corner" because he has not proposed a solution.

However, default on the national debt is "not an option," Gosar said.

Experts say markets could produce strong negative reactions if Congress doesn't act soon. In another recent example, the Dow Jones Industrial Average lost 778 points in one day in October 2008 when the House voted down the Troubled Asset Relief Program, known as the bank bailout bill. The House quickly reversed its vote.

A bipartisan group of senators proposed another plan Tuesday that Obama praised as an opening to potential compromise. It would cut $3.7 trillion in spending over the next 10 years, while rewriting the tax code to lower tax rates and eliminate some tax breaks.

Senators still must craft that plan into legislation that a majority of the Senate likes, not to mention the House.

"We don't have any more time to posture," Obama warned Tuesday.

In case all other ideas fail, Senate Minority Leader Mitch McConnell, R-Ky., has proposed a back-up plan that would allow the president to raise the debt ceiling by $2.5 trillion in return for $1.5 trillion in tax cuts over the coming decade.

Gosar calls that plan "dead on arrival with me." He said it's "unconstitutional and unwise" because Congress would abdicate its authority to raise the debt ceiling.

The Tea Party Express has issued a threat to GOP members who support McConnell's plan.

"Any Republican that supports Mitch McConnell's plan will not have the support of the tea party movement in the future and very well could find themselves being challenged in the primary," a Tea Party Express news release stated Tuesday.

Gosar is a first-term Republican dentist from Flagstaff who already faces a challenge from the then-incumbent Democrat he beat last year, Flagstaff attorney Ann Kirkpatrick.

She posted much larger campaign contribution numbers in the second-quarter report just released, $221,289 to Gosar's $166,544.

Gosar said he doesn't want to look at eliminating any tax subsidies for the wealthy or large oil companies unless that involves a comprehensive look at tax code subsidies. However, he recently voted for cuts to farm subsidies.

Gosar has signed the "No New Taxes" pledge. The pledge's author, Americans for Tax Reform leader Grover Norquist, reportedly told the Washington Post it's OK to eliminate subsidies as long as all the extra money goes toward reductions in tax rates.