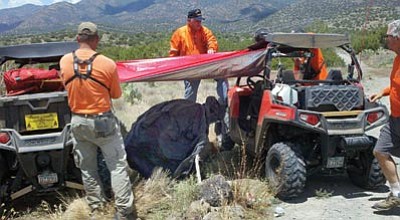 The Yavapai County Search and Rescue Team rescued a Phoenix man late Tuesday morning after he had been stranded for three days along a desolate road near Strawberry.

At 11:19 a.m., a Guidance Helicopter crew helping in the search for Gary Smith, 62, of Phoenix found his tan Ford Explorer off of Forest Road 16A, said Dwight D'Evelyn, spokesman for the Yavapai County Sheriff's Office.

The helicopter landed and the crew hiked to the Explorer and soon found Smith, who uses a cane to walk, dehydrated and disoriented about two miles away from his SUV, resting under an umbrella, D'Evelyn said.

"The helicopter crew was absolutely critical in finding him," D'Evelyn said. "He was found in a very remote area off a power line road where roads are passable, but not traveled often."

A Yavapai County Search and Rescue team came to the site, helped Smith, and set up shade for him as they waited for an emergency medical services helicopter to fly him out for further treatment, D'Evelyn said.

"We're glad he did not wander farther away from his vehicle, and that he is expected to recover," D'Evelyn said.

On Monday, July 11, a friend of Smith's in Tonopah called the YCSO and said he had just received a text Smith sent on Saturday that read, "If you get this, it's important you call Yavapai Search and Rescue. I'm stranded on Rd 14A about 8 miles from RD 269," D'Evelyn said.

The man initially called the Maricopa County Sheriff's Office to report him missing, because the area mentioned in the text was in that county.

Friends and family told investigators that Smith was delivering flowers in the Cave Creek area on Saturday morning shortly before he phoned a friend and said he was going to be late for his next appointment because he was lost on a dirt road, D'Evelyn said.

When MCSO did not find Smith, YCSO gathered cellphone information that placed Smith's phone about 17 miles northwest of a cell tower in Strawberry, D'Evelyn said.

When YCSO received the report on Monday, it was two days after Smith disappeared, D'Evelyn said.

The YCSO Forest Patrol supervisor immediately organized a Search and Rescue effort using the Yavapai County Sheriff's Response Team, Yavapai County Jeep Posse, Yavapai County Air Group, and the helicopter provided by Guidance Helicopter to focus on Forest Road 14A off of Forest Road 269 in the Bloody Basin area based on the text information provided to Smith's friend.

Searchers soon realized that Smith was not in the area, so they concentrated efforts on roads within a 17-mile radius of the cell tower in Strawberry, D'Evelyn said.

Deputies are trying to determine what led Smith to lose his way and believe he mistyped his location, road 14A instead of 16A, in the text to his friend, D'Evelyn said.

When Smith spoke with investigators on Wednesday, he said he thought Phoenix was "right around the corner," D'Evelyn said.