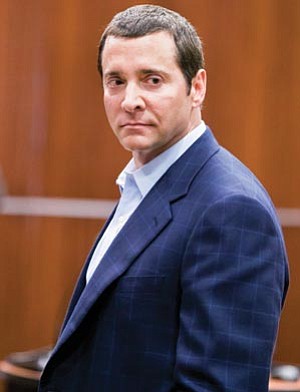 For several months, lawyers for James Arthur Ray argued that, because of the tactics employed by the Yavapai County Attorney's Office, their client, convicted last month of three counts of negligent homicide, was not receiving a fair trial.

Their complaints came piece by piece as the case evolved, but on Monday, in a motion claiming "egregious prosecutorial misconduct" that "began before trial and continues through the final hour of the proceedings," Ray's defense team provided a litany of their complaints while asking Judge Warren Darrow to grant their client a new trial.

The nearly 100-page motion categorized the alleged offenses of the prosecution, which was led by County Attorney Sheila Polk.

The defense cited the December 2009 meeting between investigators, prosecutors and medical examiners as conduct that "cannot be squared with the criminal defendant's due process rights, or with the prosecutor's ethical duties."

The motion states that Polk strongly argued for the empanelment of jurors who had stated they already believed that Ray was guilty in the deaths of Kirby Brown, James Shore and Liz Neuman, who passed away after an October 2009 Ray-led sweat lodge ceremony at the Angel Valley Spiritual Retreat Center near Sedona.

Prosecutors, the motion alleges, were excessively late in disclosing several items, including a report from an environmental consultant that suggested that carbon dioxide might have been a factor in the deaths. Also at issue are late disclosures of tests done on the victims' blood and the state's knowledge of lawsuits filed against Ray.

New evidence the state acquired well after the trial began included late-March interviews with Angel Valley owners Michael and Amyra Hamilton, as well as an April effort to secure the testimony of Dr. David Kent, who had attended Ray's Spiritual Warrior seminar in 2008.

"Virtually every week of trial revealed new information the state had failed to disclose timely - that is, before trial," the motion reads.

During the trial, the state unsuccessfully argued that settlement agreements in a civil lawsuit are an admission of liability. Also, before changing their position, prosecutors argued that it was not necessary "to identify an independent legal duty in order to prosecute Mr. Ray for his omissions."

The most notable example presented in the motion is the instance in which Polk, despite knowing that the subject was inadmissible, questioned YCSO Detective Ross Diskin if a theory of his had evolved from his knowledge of the environmental consultant's report.

Polk's questioning, the defense maintains, often seemed tailored to give the jury the impression that the "defense had somehow acted improperly in not alerting the state to the possibility of poisoning," an argument that led Darrow to issue a special jury instruction that reminded them that the state had the burden to prove Ray guilty.

Recklessness toward the possibility of eliciting perjured testimony

In the matter of Mark Rock, the state allegedly turned a blind eye to the possibility that Rock would either admit to lying to police on the night of the incident or commit perjury. Darrow decided to appoint an attorney for Rock, and that counsel advised him to "refuse the immunity the state is offering him because use immunity does not encompass someone who is determined to perjure themselves."

At the time, the state argued that Rock would not be lying under oath, but merely relying on newly recovered memories he had suppressed due to post-traumatic shock.

The motion alleges Polk again employed "burden-shifting" by belittling Ray's toxins defense as "baloney," "ridiculous" and a "house of cards."

It also argues that the prosecution improperly vouched for evidence using the prestige of the government, improperly used audio clips, and implied that Ray was solely responsible for all the conduct of his corporation, James Ray International.

Polk's conduct in "testifying" in defense of the December 2009 charging meeting, the motion states, was improper in light of the fact that the meeting itself was the topic of a previous disclosure violation.

Improper statements and improper use of evidence in aggravation-phase closing

The motion claims that Polk's allegation that Ray profited from the sweat lodge ceremony was improper because "there is absolutely no evidence of that assertion."

The motion concludes with the insistence that "The state's persistent and pronounced misconduct demands a new trial. And the knowing and willful nature of the misconduct warrants sanctions and will bar re-prosecution."

The state will have an opportunity to reply before Darrow rules on the motion. The defense has also requested a delay in Ray's sentencing until mid-August.