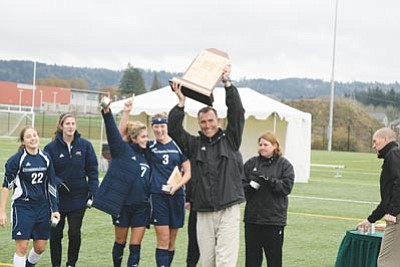 They'll be officially honored at the NJCAA Division I soccer banquet in Phoenix in the fall.

Yavapai College now has 15 members in the Hall, the most representing any school.

Luciano, who played in goal for the Roughriders during the 1989 and 1990 seasons, is a longtime Northern Arizona University soccer coach who guided the Lumberjacks to their first Big Sky Conference regular-season title in 2010.

The two-time Big Sky coach of the year's 2008 and 2009 teams won league tournament titles, and with that, automatic berths into the NCAA tournament.

Luciano credited YC coach Mike Pantalione for his success as a player and coach.

"Yavapai College basically changed my life. Without that opportunity that Mike gave me as a player, I probably would not be where I am today,"

said Luciano, who played in the Roughriders' 1990 NJCAA national championship team. "It formulated me as a person, as a man and gave me some direction in my life when I did not have a lot.

"I owe my whole playing and coaching career to Mike and Yavapai."

He went on to play at Indiana, where he helped lead the Hoosiers to a pair of NCAA tourney appearances.

Luciano was named the Big Ten's goalkeeper of the year in 1993.

"Nobody exemplified more team spirit than Andre with his enthusiasm for the program and the sport single-handedly brought people to our matches," Pantalione said. "It was the first recruiting class and individuals like Andre that really made our program have a solid foundation and that foundation still exists today."

Espinoza played in Prescott during the 2005 and 2006 seasons, helping them compile an overall record of 46-2-3.

In 2007, he led Ohio State to the NCAA championship Game, scoring the Buckeyes only goal in the final.

He was drafted by the Kansas City of Major League Soccer and has played for the Wizards, now Sporting Kansas City since the 2008 season. In addition, he has a number of national caps representing Honduras, including 2010 World Cup appearances in South Africa.

Garcia led Yavapai College to an overall record of 47-2-3 in his two years while helping the Roughriders capture the 2007 NJCAA title.

He was named to the NSCAA and NJCAA All-America Teams before moving on to play two seasons at University of California-Irvine.

He was named Big West Conference player of the year and NCAA Division I first team All-American by TopDrawerSoccer.com in 2009. He was drafted and played for the New York Red Bull of Major League Soccer in 2010.