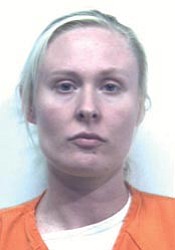 Yavapai County Superior Court Judge Tina Ainley sentenced Nicole Danielle Smith on Tuesday to four years' probation and 45 days in jail after she pleaded guilty to charges of obtaining a narcotic drug by fraud or forgery, possession of a narcotic drug and taking the identity of another.

On Oct. 6, the Yavapai County Sheriff's Office found Smith, 31, of Chino Valley in the Douglas County Jail in Eugene, Ore., after seeking her in connection with a three-month investigation into prescription drug fraud.

Deputies found Smith used a prescription facsimile in her husband's name to try to buy 90 hydrocodone pills, and an investigation showed the same prescription was used at the Walgreens and Safeway in Chino Valley as well as the Fry's Food and Drug in Prescott, D'Evelyn said.

Detectives from the YCSO Special Crimes Unit learned that since May, Smith allegedly used forged prescriptions with an alias and an out-of-state address and paid for them in cash, D'Evelyn said.