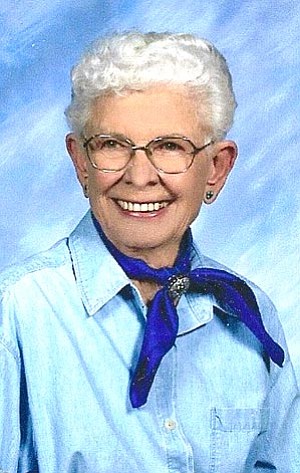 Martha Ayars Curtis, a native Prescottonian, was born Martha Cecelia Smith to Hazel and Harry J. Smith on July 25, 1922, at her grandmother's home on South Mt. Vernon Street. She passed away Jan. 24, 2011.

She attended Lincoln Elementary and Prescott High and in 1940 was in the first class to graduate from the "new" Senior High School on Granite Creek. In 1910, her father had purchased the Mint Creek Ranch in Williamson Valley and the family spent summers and several years during the Depression living and working on the ranch.

In 1974, she married Louie F. Curtis and spent many years traveling with him to archeological digs and Quarter Horse Association conventions. After Louie's death in 1993, she continued her active lifestyle in her home on Bridge Street and in 2007 moved to Las Fuentes Retirement Resort.

Martha worked in a variety of businesses in Prescott, including Vyne Bros., Bank of Arizona, Western Ranch Store, Pioneer Store & Saddle Shop and Dr. Klein's dental office. She was active in Boy Scouts as a den mother and the Campfire Girls as the children were growing up. In later years, she was a member of the BPW, the Yavapai Republican Women, the Prescott Corral of the Westerners, the Noon Lionesses and the Congregational Church.

Martha was an avid bowler in Prescott leagues for many years and loved going to state tournaments. She loved her knitting and crocheting. Her hands were always busy until her eyesight started to fade. Her "scrubbies" were a treasured item for her children, grandchildren and dear friends.

No services are planned. Anyone wishing to make a donation in Martha's name can do so to the Sharlot Hall Museum, 415 West Gurley St., Prescott, AZ 86301, or on their website, www.sharlot.org.

A celebration of Martha's life will be on Saturday, Feb. 19, from 2 to 4 p.m. at Las Fuentes Retirement Resort, 1035 Scott Drive, Prescott. Please join us in honoring Martha's life as she touched many people during her 88 years on this earth.

She always had a smile on her face and was a positive force for so many people. She will be missed.